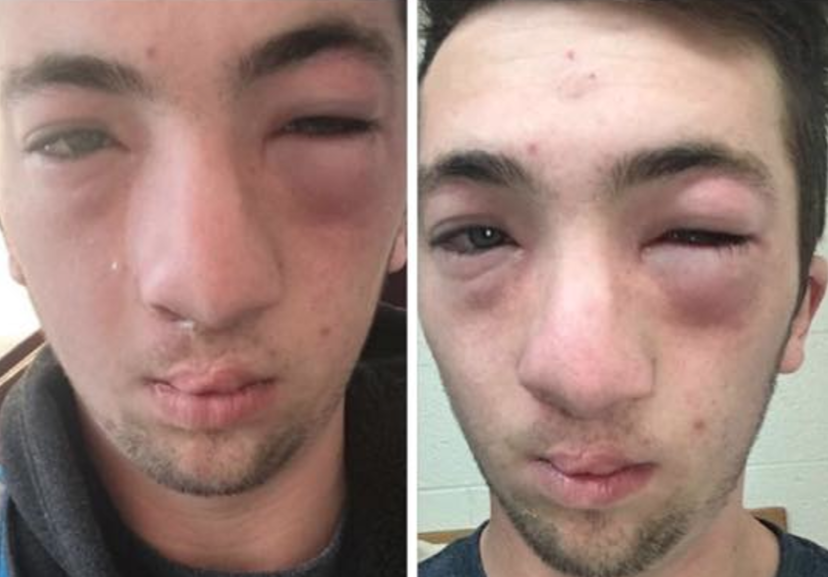 An outraged mother’s Facebook post is going viral after the Michigan woman posted a photo of her son’s severe allergic reaction to peanut butter, which, she claims, was rubbed on his face while he was asleep at an off-campus fraternity back in October.

Teresa Seely said her now 19-year-old son, Andrew, just told her about the incident at the Alpha Chi Rho fraternity at Central Michigan University (CMU) during his first semester as a freshman after she saw one of his friends post about it on Facebook Tuesday.

“We found out that our son was a victim of a hazing incident,” Seely wrote in a post that has since been shared by more than 1,400 people. “This is a picture of what they did to him. He has a deadly peanut allergy and they rubbed peanut butter on his face while he was passed out.”

The concerned mom said she has notified the university, local police and consulted with an attorney in response to the news.

“My heart just sank to my stomach when is saw [the photos],” Andrew’s dad, Paul Seely, told CBS News. “As time goes on, the reality sets in -- he could have died. He really could have. If peanut butter had gotten into his mouth it would have been dire.”

The family says they’ve learned a professor took him took him to the campus health clinic for treatment.

Heather Smith, director of communications at Central Michigan University, told CBS News the school found out about the alleged hazing through social media on Wednesday.

“Obviously this is very concerning and we take these things very seriously,” said Smith, adding that it’s a potentially a criminal matter.

The Office of Student Conduct has already contacted Seely and provided her with information on how to file a police report, Smith said. The Mt. Pleasant Police Department told CBS News Thursday afternoon that the October incident has not yet been reported to police, and there’s currently no active investigation.

Andrew left the school at the end of the semester and transferred to a different school, which his parents didn’t identify. Smith says Andrew would have to directly contact the Office of Student Conduct in order for the school to proceed with an investigation.

“He’s been very emotional about this as he understands how serious this is,” the teen’s father said. “He can’t get his head around it. Its really affected him -- he had to get away.”

Smith said the fraternity involved, Alpha Chi Rho, was officially disbanded on the campus in 2011.

“[They are] not a recognized fraternity at CMU,” Smith said. “They were removed from campus in 2011 for hazing.”

According to Smith, the group appealed to be recognized as a fraternity at the school last fall, but the request was denied by CMU’s Interfraternity Council. Andrew’s parents said their son, then 18, rushed Alpha Chi Rho in the fall and accepted a bid from “what he believed was a fraternity” weeks prior to the incident.

The national fraternity of Alpha Chi Rho confirmed to CBS News in a statement via email that there is not currently an Alpha Chi Rho chapter or colony at CMU.

“Prior to this incident, when we learned that a small group of individuals had been improperly operating under our name, we promptly sent a letter to these men to stop all activity or representation of our fraternity,” the organization said.

The national fraternity group said the individuals involved were not members and acted independently.

“Alpha Chi Rho does not condone this type of behavior -- or any form of hazing -- and it stands in conflict with our mission to cultivate men of character, honor and integrity,” they said.

While Andrew’s parents are openly voicing their concerns and raising awareness about the seriousness of allergies, the student involved is claiming there has been a misunderstanding.

NBC Detroit affiliate WDIV spoke to the student who spread the peanut butter on the teen’s face and he said it wasn’t hazing -- it was a harmless prank.

“It was just a joke trying to be funny and put it on his face,” the student told WDIV. “We didn’t know he was allergic. It was just college students being kids.”

But Andrew’s dad doesn’t believe that to be the case.

“Andrew made it very clear and aware to everyone in that house that he had a peanut allergy,” said Paul Seely, explaining that Andrew carries an Epi-Pen and Benadryl tablets with him at all times. “He told them they couldn’t eat anything with peanuts around him. He wears a medical bracelet. For this individual to think that it was just a joke is hard for us to comprehend.”

“That’s a form of protection on his part to say that he was just joking,” he added. “If the frat guys did this and they saw him having a reaction why didn’t they call 911?”

The parents said their attorney will work with the local police and that Andrew plans to give a statement to both the school and authorities.

“We will be seeking justice for Andrew and we’ll hold the parties we feel are responsible accountable for what happened to him,” Paul Seely said.