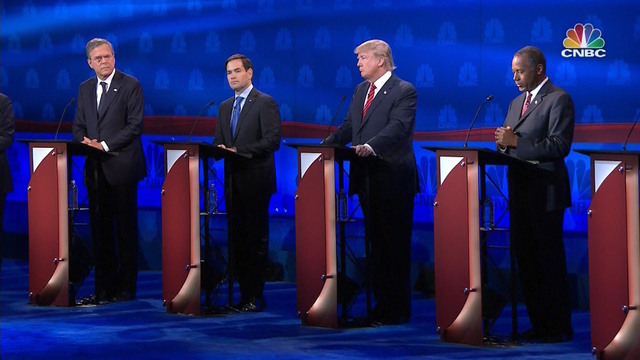 After a meeting Sunday night, nearly all of the Republican campaigns came to a decision about debates going forward. They plan to take a substantial portion of control over debate negotiation away from the Republican National Committee (RNC).

First, they plan to have a formal conversation with RNC Chairman Reince Priebus to insist on new conditions, according to two Republican operatives who were in the room.

The campaigns want to deal directly with networks on issues of format and debate rules, while the RNC will be relegated to handling logistics. Ben Carson's campaign manager, Barry Bennett, said, "The RNC is a partner. They are just not our boss."

Donald Trump's campaign manager, Corey Lewandowski, also suggested that given that the campaigns intend to take control over negotiating the debates from the RNC, "that means that there are no guarantees of all of the debates will be held."

The campaigns also want the RNC to institute a process whereby the campaigns can receive information about debates in a timely manner.

In terms of format, they are also demanding 30 second-long minimum opening and closing statements.

There will be equal number of questions for each candidate, though networks will not be required to give each candidate equal time.

Since the Fox Business debate is just nine days away, campaigns agreed that these conditions would not be fully implemented until the next debate, which is scheduled for December.

The campaigns came to no consensus on the question of undercard vs. main-stage debates, to the dismay of some of the campaigns of the lower-tier candidates.

Bobby Jindal campaign strategist Gail Gitcho called it "disappointing." She said, "It's unfortunate that the way the process is now, networks can be party bosses, rather than voters in Iowa and New Hampshire and other primary and caucus states."

The biggest complaint from the campaigns, though, "from top to bottom was the lack of information of the networks in giving them what actually was going to take place," Lewandowski said.

Outside of the meeting Sunday evening, negotiations continued over the February debate taken from NBC last week. CBS News confirmed that Jeb Bush's operatives were pushing for Telemundo -- the Spanish-language network owned by NBC -- to be allowed to co-host the debate. Donald Trump's operatives, however, opposed that idea.