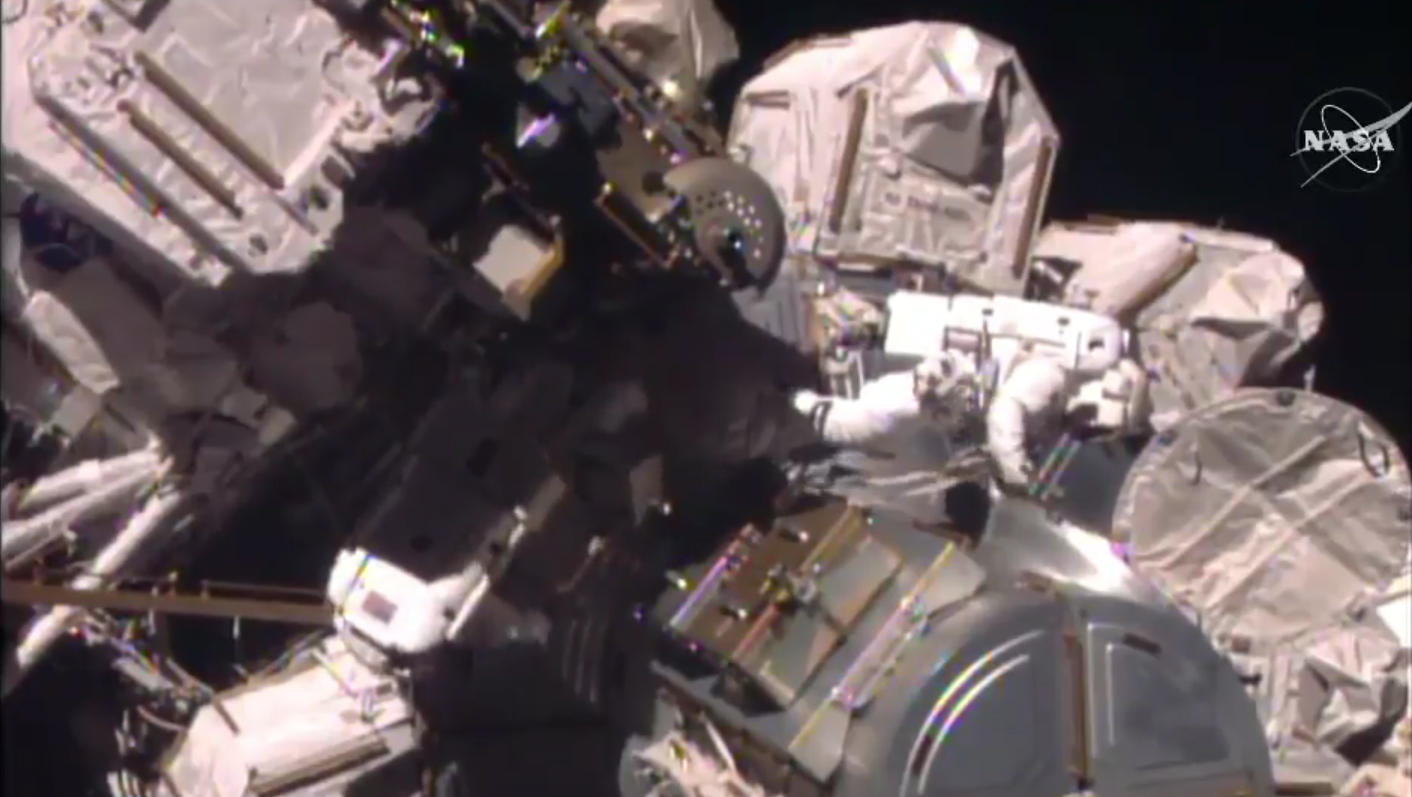 The astronauts also replaced a camera light, pulled back insulation over a storage box to clear the way for the lab’s robot arm to replace failed components later and stowed the brake handles on an astronaut equipment cart. The only task left undone was a low-priority photo-survey of a high-energy physics experiment to assess its insulation.

The spacewalk began at 7:53 a.m. EDT (GMT-4) and ended at 2:41 p.m. when the astronauts began repressurizing the station’s Quest airlock module. They were helped back inside the station by Japanese astronaut Takuya Onishi and cosmonaut Anatoly Ivanishin.

This was the second spacewalk for Williams and Rubins in 13 days, coming just five days before Williams is scheduled to return to Earth Tuesday night (U.S. time) aboard the Soyuz TMA-20M spacecraft along with vehicle commander Alexey Ovchinin and flight engineer Oleg Skripochka.

Touchdown on the steppe of Kazakhstan at 9:14 p.m. Tuesday will close out a 172-day mission, boosting Williams’ total time in space across four flights to a U.S. record 534 days.

Today’s spacewalk was the 195th devoted to station assembly and maintenance since construction began in 1998, the fourth and final outing planned for this year, the second for Rubins and the fifth for Williams.

The astronauts accomplished the primary objective of the excursion early on when Williams, using a power tool, drove a bolt on the outboard end of the station’s main solar array truss that retracted the folding panels of a no-longer-needed ammonia coolant radiator.

The Trailing Thermal Control Radiator, or TTCR, was used during the initial years of space station assembly when the P6 solar array truss segment, now at the far left end of the station’s power truss, was mounted atop the central Unity module. The radiator and arrays later were stowed and the module was moved to the far left end of the power truss.

But the TTCR was re-extended in 2012 as part of an effort to pinpoint an ammonia coolant leak. As it turned out, the leak was found elsewhere, but NASA was not able to immediately work in a radiator retraction. An earlier attempt was made, but that crew ran out of time due to other issues.

Williams and Rubins had no problems today, retracting the folding panels, attaching cinches to compress and hold them in place and putting a protective shroud over the tightly packed panels.

“It’s one of our high priority spares, we really want to be able to get it retracted and covered up so we can count on it in the future should the need arise,” flight director Zeb Scoville said earlier.

With the retraction complete, Williams made his way inboard along the truss and anchored his feet in a restraint mounted on the end of the station’s robot arm to replace a camera light on an Earth-facing stanchion. He then installed two high-definition television cameras that will allow flight controllers to carry out detailed photo surveys and Earth observations.

While Williams was busy with the camera work, Rubins inspected the left-side Solar Alpha Rotary Joint, or SARJ, one of two used to rotate the outboard solar arrays like giant paddle wheels to track the sun.

Sensors have indicated subtle vibrations in the mechanism and Rubins was asked to make sure three support struts were firmly in place and to inspect the interior of the mechanism to verify a smooth coating of grease. She reported an even coating and tightened the support strut bolts.

She also pulled back insulation on a storage compartment where several components are housed that will be replaced later. With the insulation out of the way, the station’s robot arm will be able to handle the component swap outs later.

With their primary objectives complete, the spacewalkers had time to tighten up the brake handles on a crew equipment cart that’s mounted on the same rails used by the motorized carrier that moves the robot arm back and forth along the front face of the solar power truss.

The only other item on the crew’s get-ahead list was a photo survey to inspect the insulation on the Alpha Magnetic Spectrometer mounted on the right side of the truss. The experiment has experienced problems with cooling pumps and engineers want to assess the health of insulation blankets that cannot be seen from inside the station.

But mission managers opted to defer the inspection to a later spacewalk, and the astronauts were told to head back to the Quest airlock. A few minutes later, the airlock was repressurized and Williams and Rubins were helped out of the lock and back into the station.