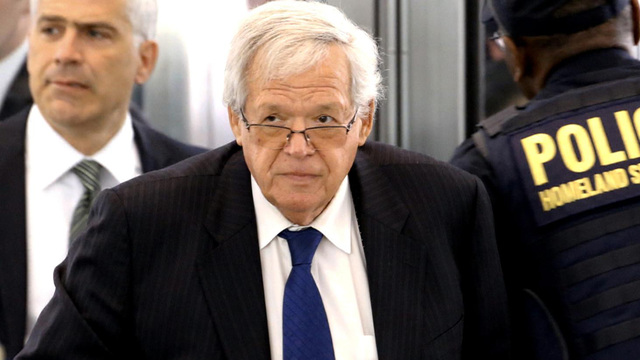 CHICAGO -- Attorneys disclosed at a pretrial hearing Monday in federal court in Chicago that former U.S. House Speaker Dennis Hastert is negotiating a possible plea deal with prosecutors. The Illinois Republican, 73, pleaded not guilty earlier this year to charges that he broke federal banking laws and lied to the FBI as he attempted to pay someone $3.5 million to hide claims of past misconduct. The Associated Press and other media, citing anonymous sources, have reported the payments were intended to conceal claims of sexual misconduct decades ago. Neither prosecutors nor defense attorneys have spoken publicly about that allegation.

Here are a few questions and answers about the case against Hastert:

Q: Why would Hastert seek a plea deal?

A: Sealing a plea agreement would short-circuit the need for a trial and, therefore, help Hastert ensure that potentially embarrassing details underlying the charges against him are never divulged, at least never through the legal process. In exchange for agreeing to plead guilty, the government would likely agree to a less severe prison sentence from the judge, possibly even recommending probation.

Q: What would prosecutors get out of a plea deal?

One of the advantages for prosecutors is that they would avoid a costly, time-consuming trial. The risk of going to trial is that jurors end up acquitting Hastert, and a plea deal would guarantee a conviction. "This case is a classic case where it is in everybody's interest to reach a plea," said Andrew Herman, a prominent Washington-based attorney who has represented clients targeted by ethics investigations in Congress.

Q: When will we know if there's a deal?

A: U.S. District Judge Thomas M. Durkin told both sides at Monday's hearing that he wants an update on progress of talks by the next status hearing, which he set for Oct. 15. If the sides tell him then that they have reached agreement, Durkin said he'll set a date for Hastert to change his plea to guilty. But if they don't have a deal, he'll set a trial date for either March or April. Fixing a trial date would also set into motion additional actions, including a requirement that the prosecution turn over more evidence. Nothing would stop both sides from continuing to talk after a trial date is set. But the closer a trial gets, the less likely they'll be able to agree.

Q: What are the specific charges and potential penalties?

A: Hastert is accused of evading federal banking reporting requirements by withdrawing hundreds of thousands of dollars in increments of less than $10,000 and then lying to the FBI about the reason for the withdrawals. If found guilty, he faces a maximum five-year prison sentence and a maximum $250,000 fine on each of those two counts. He has pleaded not guilty.

Q: What was the money for?

A: The May 28 indictment says Hastert agreed in 2010 to pay $3.5 million to a person identified only as "Individual A" to "compensate for and conceal (Hastert's) prior misconduct" against that person. The indictment does not specify the misconduct. The document does note that Hastert was a history teacher and wrestling coach from 1965 to 1981 in suburban Chicago. The other party "has been a resident of Yorkville and has known Hastert for most of Individual A's life," the document says. A person familiar with the allegations told The Associated Press that the payments were intended to conceal claims that the Illinois Republican sexually molested someone decades ago. The person spoke to the AP on the condition of anonymity because the investigation is ongoing.

Q: Could Hastert face other charges or be sued?

A: Legal experts say Hastert is unlikely to face charges on any sexual abuse he may have committed in the 1960s or 1970s. When Hastert taught and coached in the Chicago suburb of Yorkville, Illinois' statute of limitations for sexual abuse was three years. State legislators have since extended that period, but those changes are not retroactive. Statutes of limitation are not as restrictive for civil cases, but Hastert would probably not be vulnerable to lawsuits either, Monu Bedi an assistant professor at DePaul University College of Law in Chicago, has said. Before 1991, Illinois law allowed lawsuits involving child sex abuse to be filed for two years after the victim turned 18. That time frame was extended incrementally. By 2012, a victim turning 18 had 20 years to sue, Bedi said. A 2014 law dropped the statute of limitations entirely on lawsuits against child abusers, but the law was not retroactive.