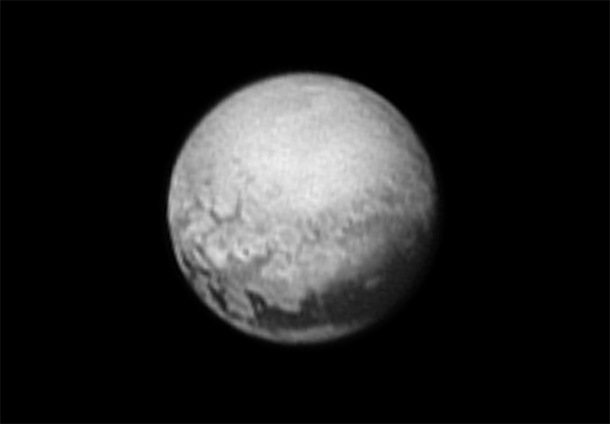 The New Horizons probe, hurtling ever closer to Pluto, is beginning to pick up clear signs of surface geology, including unusual polygon-shaped features and sharp transitions between bright areas and a dark region along the equator known as "the whale," project scientists said Friday.

The latest image was snapped Thursday while New Horizons was still 3.3 million miles from its target. As such, features are not yet in razor-sharp focus. But the clarity is steadily improving as New Horizons races toward Pluto at more than 31,000 mph.

"Among the structures tentatively identified in this new image are what appear to be polygonal features, a complex band of terrain stretching east-northeast across the planet, approximately 1,000 miles long and a complex region where bright terrains meet the dark terrains of the whale," principal investigator Alan Stern said in a NASA web post. "After nine-and-a-half years in flight, Pluto is well worth the wait."

The image has a resolution of 17 miles per pixel and shows the hemisphere of Pluto that always faces Charon, Pluto's Texas-size moon.

"We're close enough now that we're just starting to see Pluto's geology," said program scientist Curt Niebur. He noted the stark transition from light areas to the darker region of the whale, saying it indicated "a lot of dynamic processes interacting, which makes it of particular scientific interest."

New Horizons will pass within about 7,500 miles of Pluto early Tuesday after a voyage spanning three billion miles since launch in January 2006.