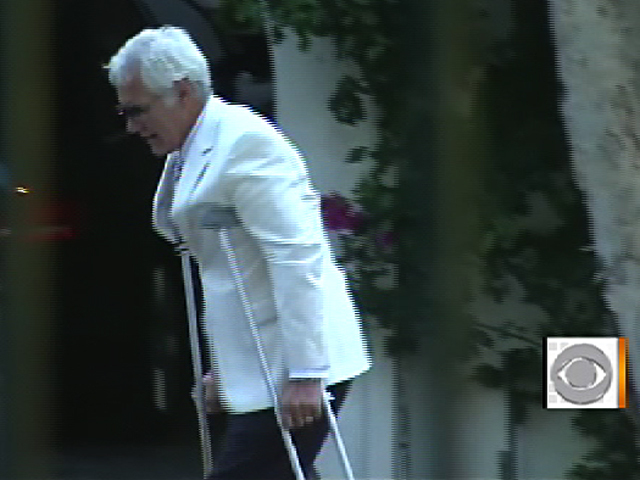 (CBS) - That Alex Trebek, he's something else.

The "Jeopardy" host of 25 years took the stage with crutches at the National Geographic World Championship event he was hosting in Northern California. When asked about the injury, Trebek explains, "The answer is: At 2:30 yesterday morning, chasing a burglar down the hall. My Achilles tendon ruptured and I fell in an ignominious heap to the carpeting, bruising my other leg in the process."

Early Wednesday morning, 71-year-old Trebek and his wife were sleeping in a San Francisco hotel when an intruder broke into their room, grabbing money and valuables.

"As they exited the room, they gave chase to the suspect injuring themselves as they were giving chase. The suspect was later apprehended by one of the security inside the hotel," Police Lt. Troy Dangerfield said.

Lucinda Moyers, 56, was arrested by San Francisco Police and charged with felony burglary and receiving stolen property. She took the bracelet Trebek's mom gave to her son 20 years ago. Viewers might be familiar with it because the game show host wore it on the show every day.

Trebek is now home in Los Angeles and will undergo surgery on Friday, but no, he did not get back that sentimental bracelet.

Fans and followers are taking to Twitter to express their adoration for the brave game show host, not to mention the fact that they had no idea he is 71.

With tweets of easy "Jeopardy" jokes that go something like "Answer... Question..."  we get a mid-day chuckle, but hope for Trebek's speedy recovery.