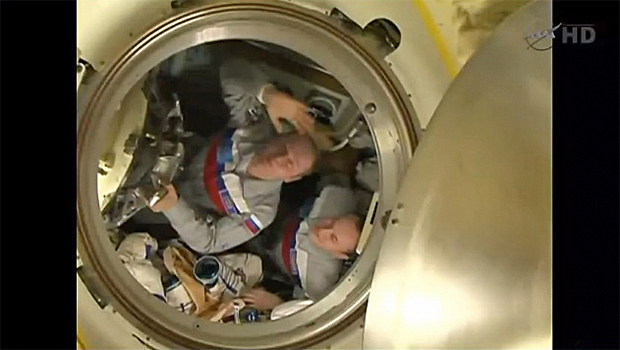 Two cosmonauts and a NASA astronaut are set for a fiery plunge back to Earth late Monday aboard a Russian Soyuz ferry craft. It will close out a 166-day stay in space.

"One of the great things about leaving home is coming home," Mike Hopkins, who left a wife and two sons behind on Earth last September, said in a NASA interview. "Being reunited with my family, I think, is going to be absolutely wonderful."

Hopkins, Soyuz TMA-10M commander Oleg Kotov and flight engineer Sergey Ryazanskiy floated into their ferry craft and closed the hatch just before 5 p.m., on track to undock from the station's upper Poisk module at 8:02:30 p.m.

Severe winter weather at the landing zone in Kazakhstan prompted concern the flight might be delayed. But Russian mission managers decided late in the day to press ahead after reviewing the weather and the status of recovery crews near the landing zone.

After moving a safe distance away from the space station, Kotov, strapped into the craft's center seat, plans to oversee a four-minute 50-second rocket firing starting at 10:30 p.m. to slow the spacecraft by about 286 mph. That's just enough to lower the far side of its orbit into the atmosphere for a steep plunge to the steppe of Kazakhstan.

Moments before falling into the discernible atmosphere at an altitude of 87 miles, the three modules making up the TMA-10M spacecraft will split apart and the central crew module will orient itself heat shield forward to endure the extreme temperatures of atmospheric entry.

If all goes well, the spacecraft's main parachute will unfurl at an altitude of about 6.5 miles to slow the craft for the final stages of the flight before it settles to a jarring rocket-assisted touchdown at 11:24:58 p.m. near the town of Dzhezkazgan.

Russian recovery forces stationed near the landing site, along with U.S. and Russian medical and support personnel, were expected to be on the scene within a few minutes to help the returning station fliers out of the cramped Soyuz command module as they begin the slow process of re-adjusting to Earth's gravity.

And not just gravity. Their first taste of Earth weather in half a year will include snow and arctic temperatures around 10 degrees Fahrenheit, par for the course on the Kazakh steppe in early March.

If normal practice is followed, the returning station fliers will be carried to recliners with blankets set up near their spacecraft for quick on-site medical checks and satellite phone calls home to friends and family.

All three then will be flown by helicopter to Karaganda where they will split up. Kotov and Ryazanskiy will continue on to Star City near Moscow while Hopkins will board a NASA jet for the long flight back to the Johnson Space Center in Houston.

Left behind in orbit will be Koichi Wakata, cosmonaut Mikhail Tyurin and NASA astronaut Rick Mastracchio, more than two months into a planned six-month stay in space. During a weekend change-of-command ceremony, Wakata took over from Kotov, becoming the first Japanese astronaut to command the station.

"I am humbled to assume command of the space station," Wakata told Kotov and his crewmates. "We will continue to keep station operations safe, efficient and fun as you guys led us to do. So have a safe return and we'll catch you back on the planet in a couple of months."

Hopkins is the first of his 14-member 2009 astronaut class to win a flight assignment. Raised on a farm in Missouri, captain of his University of Illinois football team and an Air Force flight test engineer, Hopkins said his first spaceflight, including a pair of unscheduled spacewalks in December to replace a critical cooling system pump, met all of his expectations and then some.

"Discovering new things is exciting to us," he said in a recent interview. "That's probably the part that we love [the most]. There are over 200 experiments that are going on during this increment, and they cover a wide range of areas, areas that we're not necessarily experts in but it's neat to see the results."

Asked what had surprised him the most during his stay in space, Hopkins said the experience of floating in the microgravity environment of orbit was a genuine thrill.

But it took some getting used to.

"When I first got into orbit, and of course this was my first trip into space, I felt like I was falling," he said. "I felt like I was sitting on the ceiling down on Earth and was wanting to fall down to the floor. And that feeling lasted probably 24 hours. And then slowly after that, I got beyond that and finally, I would say (it took) probably two weeks to a month before you finally realize you don't need up or down."

In another recent interview, Hopkins was asked which planet in the solar system he would most like to visit. He promptly said "Earth."

"Being away from Earth, this is an absolutely incredible experience and it's something I'll never forget," he said. "But I'm getting ready to come home, and I'm looking forward to it.

"You see the views of Earth up here, and it is truly stunning, and it's something that never gets old. But at the same time, I'm really looking forward to feeling the Earth between my toes, feeling a breeze, maybe even standing out in a rain storm. Earth is truly incredible, and I think that's where I'd like to go."