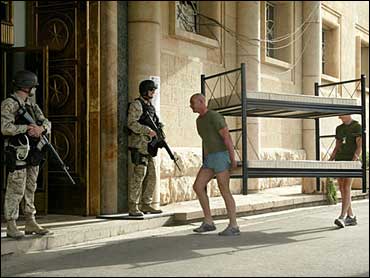 Iraq's U.S.-appointed governing council is on a collision course with the United States over the development of a new constitution, a key step in the return to Iraqi sovereignty and the withdrawal of U.S. troops.

The United States is considering abandoning the council and creating a provisional government to rule until a new constitution is written and elections are held, the Washington Post reports. This plan, similar to what the United States implemented in Afghanistan, is backed by other U.N. Security Council members, the Post reports.

A senior U.S. official in Baghdad says the Iraqi Council is "inept" at reaching its own people and has done "nothing of substance" since it was appointed in August, the Post reports.

In the face of mounting U.S. pressure to move faster, a senior Iraqi official said today the deteriorating security situation may slow things down.

Iraq's foreign minister, Hoshyar Zebari, told reporters that the U.S.-appointed Iraqi administration would submit a timetable to the U.N. Security Council for drafting a constitution and organizing national elections. The deadline was set by the Security Council in a resolution unanimously adopted last month.

"However, those timetables depend on the security situation, and if the security deteriorates, we will not be able to adhere to such commitments," Zebari said at a press conference with the Spanish foreign minister, Ana Palacio.