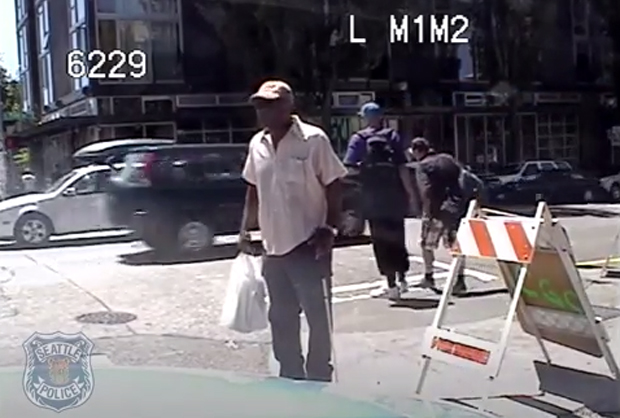 SEATTLE -- A police officer is under investigation after video surfaced of her arresting a 69-year-old man who refused to drop a golf club he was carrying on a city sidewalk.

CBS affiliate KIRO reported Seattle Police Chief Kathleen O'Toole apologized for the incident and said the officer was being removed from patrol duty until an investigation was complete.

A video of the July encounter was recorded by the patrol car's dashboard camera and released by the Seattle Police Department on Wednesday.

The video showed officer Cynthia Whitlatch pulling her cruiser up to a corner where the man, William Wingate, was standing, and yelling at him to drop the golf club.

She told him he had swung it at her, and that audio and video recordings from her cruiser would back up her allegations.

Wingate appeared surprised, seemed to have trouble hearing the officer, and then insisted he had done no such thing. He said he had used the golf club as a cane for 20 years.

Wingate was eventually convicted of unlawfully using a weapon under a plea deal in which the charge would be dismissed if he had no other offenses for two years.

No recordings surfaced to bolster Whitlach's version of events, and after a state lawmaker questioned the arrest, the city attorney's office took another look. Prosecutors dismissed the conviction, and the police department apologized for the arrest and returned his golf club. The department said this week the officer had "received counseling" from her supervisor -- which O'Toole initially deemed an appropriate resolution.

But then the chief became aware of troubling Facebook posts made by Whitlatch about a month after the arrest -- at a time when protests in Ferguson, Missouri, had gripped the nation's attention. The weekly newspaper The Stranger reported that Whitlatch said she was tired of "black peoples (sic) paranoia" and wrote of "chronic black racism that far exceeds any white racism in this country."

Whitlatch is white; Wingate is black.

In a written statement Thursday, O'Toole said she was "shocked and disappointed" on Wednesday to read Whitlatch's comments. She reassigned the officer to desk duty, where she would have no interaction with the public, pending a review of her cases, and asked the Office of Professional Accountability to launch an independent investigation.

"We are working to reform the Seattle Police Department, and behavior of this nature seriously undermines our efforts," O'Toole said. "I was hired because of my track record for reform and my commitment to bias-free policing. I knew this would be a difficult job, but days like this make me even more determined."

The Seattle Police Officers Guild did not immediately return a message seeking comment on Whitlatch's behalf.

The Seattle Police Department has made several changes prompted by a Justice Department investigation that found signs of biased policing, as well as evidence that officers are too quick to use force, especially in low-level situations.

Wingate has filed a $750,000 claim against the police department.