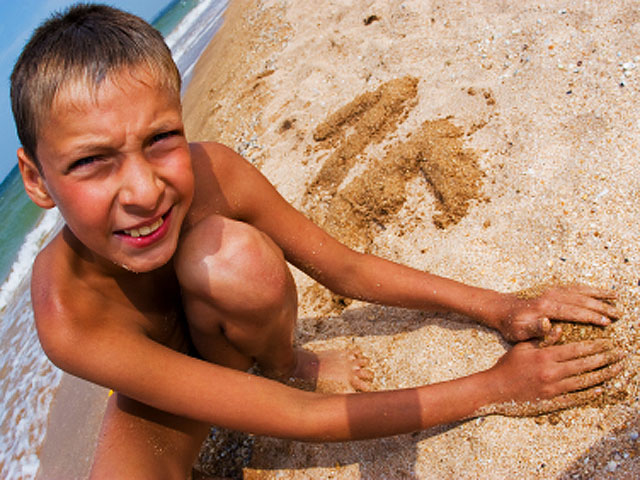 "Slip! Slop! Slap! and Wrap" may be losing its grip.

Despite numerous efforts to encourage people to wear sunscreen, a new study shows only 1 in 4 children regularly uses sunscreen.

Researchers say more than half of the children in the study also reported having a sunburn in the previous summer.

Experts say those results are troubling.

"The problem is if you sunburn in childhood, you raise your risk of developing skin cancer later on," says Sophie J. Balk, MD, a pediatrician at Children's Hospital at Montefiore in New York City.

A recent study showed that children who have a sunburn at an early age are nearly twice as likely to develop melanoma in adulthood. Melanoma is the deadliest form of skin cancer, and is responsible for nearly 9,000 deaths in the U.S. each year.

Exposure to ultraviolet light radiation from the sun or tanning beds is the biggest modifiable risk factor for melanoma.

In the study, researchers surveyed 360 fifth graders about their sunscreen use and sun exposure habits in 2004 at about age 11 and again three years later in 2007.

The results showed that half of the children reported routinely wearing sunscreen in 2004, but only 25% did so in 2007.

In addition, more than half of the children said they had sunburns in both the summer of 2004 and 2007.

Researchers say the results show that the time between ages 11 and 14 is a critical time in developing attitudes about tanning and wearing sunscreen, especially among girls.

For example, girls were more than twice as likely to report liking a tan at age 14 than at age 11. They were also much more likely to say they spent time out in the sun in the previous summer.

By the time boys and girls in the study were 14, they were 60%-70% less likely to say they "often or always" wore sunscreen when at the beach or pool last summer than when they were 11.

"Of most concern, it appears that groups at highest risk of skin cancer, very fair/fair children and those who obtained tans, were more likely to increase their sunburns during this crucial period," researcher Stephen Dusza, MD, of Memorial Sloan-Kettering Cancer Center in New York City, and colleagues write in Pediatrics.

"The next step is to learn how to best promote sun protection in pediatric offices and community settings such as beaches, after-school sites, and sporting events," Dusza says in a news release. "This is especially true for adolescents who are developing tan-promoting behaviors."

Balk says wearing sunscreen should be just one part of a total skin cancer prevention program for teens. Other ways to protect skin from the damaging effects of the sun include:

"Parents should understand that a tan is a sign of a problem and set an example for their kids by getting into the habit of sun protection so hopefully it becomes a lifelong habit for their children," Balk tells WebMD.