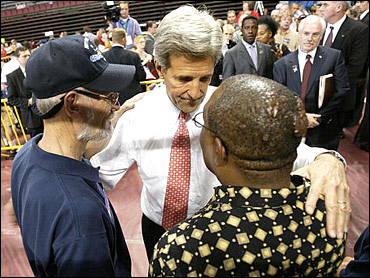 Democratic presidential candidate John Kerry on Friday celebrated the "special bond" he shares with other veterans across the country as he formally launched his campaign for the traditionally conservative-leaning veterans' vote.

But a new CBS News poll shows Kerry faces an uphill fight to capture the support of his fellow vets. Kerry trails President Bush by a wide margin, 54 percent to 40 percent, among those who have served in the military. Those numbers contrast with Kerry's 49 to 41 percent lead among all voters in a CBS News poll conducted May 20-23.

Kerry's campaign has organized volunteer veterans coordinators in all 50 states who will try to recruit current and former soldiers to his campaign. The goal is to sign up 1 million veterans to help get out the vote for Kerry in what they say would be an unprecedented veterans organization in a presidential campaign.

"We're hear because we understand that what we fought for is still at risk," Kerry said during a rally at the University of Minnesota. "We're here because we know that the story of America is an evolving story and that every generation gets its opportunity to be able to write a part of our history. We're here because right now this country needs to be put back on track, to change direction and begin to work again for everybody."

For a second day, Kerry criticized the Bush administration's announcement Wednesday that it would expand the "stop-loss" program, requiring thousands of soldiers to remain in the military if their tours of duty extend to Iraq or Afghanistan.

"I'll tell you this, that for this group of veterans, there's no stop-loss policy that gets put in place," Kerry told his organizers in a conference call before the rally. "This thing ends on November second."

John Hurley, Kerry's national veterans director, says veterans will be motivated to vote for Kerry because of his Vietnam war experience and their anger at diminished services from the Veterans Administration and Mr. Bush's handling of Iraq.

"I think veterans are really uneasy, particularly Vietnam vets have a haunting sense of deja vu," Hurley, who was an Army lieutenant in Vietnam, said in an interview aboard Kerry's campaign plane. "John Kerry is going to get the veteran vote. Even if it has been Republican in the past, we are going to carry it."

An estimated 26.4 million people, or better than one in seven voting-age Americans, have served in the U.S. military, according to 2000 Census figures analyzed by the Department of Veterans Affairs.

The Bush campaign also has a band of volunteers to seek out veterans. Retired Lt. Col. Joe Repya said veterans are concerned about Kerry's votes to cut military pay, weapons systems and against funding for operations in Iraq and Afghanistan during his nearly 20-year Senate career.

"I think most vets understand this election is not about Vietnam," said Repya, who served 18 years in the Army Reserves and 10 years on active duty, including tours in Vietnam and Operation Desert Storm. "This election is about who can win the war on terror."

Repya, who has organized a Bush rally Friday at the same University of Minnesota campus where Kerry is speaking, said he and most other veterans would say Kerry served honorably despite the anti-war stance he took after returning home from Vietnam. He said veterans are more offended by the "shameful way that Kerry demagogues older veterans by saying that Bush cut their benefits."

Kerry on Friday repeated his criticisms that veterans aren't getting the medical and other federal services they earned under Bush.

"You can't run around the country talking about patriotism and the flag and service to nation and willfully turn your back on the very people that you've asked to go do that and serve," Kerry said during the conference call.

The Bush administration has increased benefits, veterans' enrollment in VA health care and spending overall for that department, but also has found places in the system to save money. In one, the government barred new enrollment of higher-income veterans in the VA health care system unless their medical problems were directly related to their military service.

Kerry, although light on specifics, insists he would do better for veterans on their health care, pensions and more. For example, he has pledged to let all veterans who receive disability payments collect their full retirement pay.

Congress recently took steps toward ending the system of reducing military retirement pay by $1 for every dollar received in disability compensation, and Mr. Bush says he supports that goal. But critics argue that the plan would still penalize several hundred thousand veterans.

Regardless of who wins the Nov. 2 election, a 1998 decision to open VA health services to all veterans has left the government struggling to accommodate the demand for VA facilities.