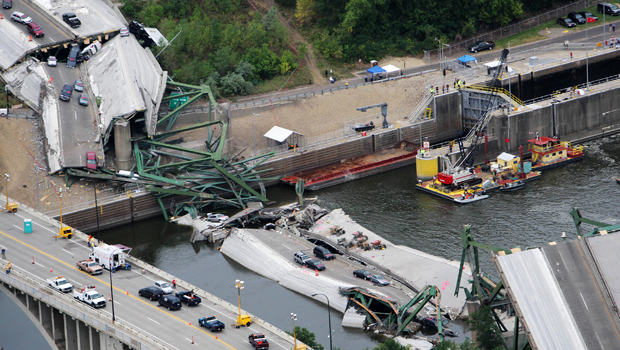 MINNEAPOLIS -- Mohamed Roble was weeks shy of his 11th birthday when the school bus he was on plummeted more than 30 feet as the bridge beneath gave way.

Now, according to court testimony in a federal terrorism trial, Roble - one of the 145 people injured in the Minneapolis bridge collapse that killed 13 people - is believed to be in Syria with the Islamic State of Iraq and Syria, or ISIS.

Roble and four of his siblings were on the bus that was carrying 52 students and several adults when the Interstate 35W span collapsed on Aug. 1, 2007, sending shockwaves nationwide about the safety of the country's infrastructure. All of the occupants of their bus survived.

His injuries included headaches, arm, neck and back pain, nightmares and post-traumatic stress disorder, records show. One letter from a therapist said Roble "seems the most traumatized of all the siblings" and "he worked on his spiritual belief that 'God had saved him for a purpose.'"

For his injuries, a 2009 state court order says, Roble was due to receive a lump sum payment of $65,431.22 on his 18th birthday - roughly a month and a half before federal prosecutors say he left the U.S. for Istanbul, Turkey.

Roble's name surfaced in federal court last week during the trial of three Minnesota men accused of conspiring to travel to Syria to join ISIS. Testimony has suggested that at least some of the men in the group knew Roble had money and asked him to fund their own trips. One man believed Roble had gone to Syria with thousands of dollars and used it to pay for weddings for fighters and cars.

The bridge collapse was not mentioned during the trial. The Associated Press made the connection using state court records to trace the bridge collapse victim to a Minneapolis high school, then matched the victim's yearbook picture to a photo the government has provided of the young man believed to be in Syria. A handful of people who knew the family also confirmed the match.

Working phone numbers and current addresses for Roble's family members were not available and they could not be reached for comment. The U.S. Attorney's Office declined to comment beyond what was said in court.

According to evidence presented in federal court last week, Roble flew to Istanbul in October 2014 as part of an itinerary that included a trip to China. He was due to return to the U.S. in June 2015, but never did, FBI Joint Terrorism Task Force Officer Joel Pajak testified.

"We received information that Mr. Roble ended up in Syria with his uncle, Abdi Nur," Pajak testified.

Nur is among 10 men charged in the case; six others have pleaded guilty, and a trial continues in Minneapolis for the other three.

Prosecutors say the men were part of a group of friends who recruited and inspired each other to join ISIS. Roble has not been charged, but prosecutors included his picture in a court exhibit that contains the photos of 16 men who authorities say joined or conspired to join militant groups in Syria and Somalia.

The FBI has said that roughly a dozen young men have left Minnesota to join militant groups in Syria in recent years.

Little has been revealed about Roble, but testimony suggests at least some of the men knew he had money. One witness, FBI informant Abdirahman Bashir, testified that in the fall of 2014 some group members asked Roble if he could finance their own trips.

"We all knew that he had money, and we were asking him if he could give us some money for travel and he said yes," Bashir testified. Under questioning from Assistant U.S. Attorney Andrew Winter, Bashir added that Roble "had a lot of money from an accident before, and got a settlement."

It isn't clear whether Roble actually funded trips for potential travelers, and evidence so far suggests he did not. Bashir's testimony showed the men struggled to find ways to finance their own travel.

But in one secretly recorded conversation played for jurors, defendant Guled Omar told Bashir that Roble took thousands of dollars to Syria and was passing out money like "candy." In that conversation, Omar said Roble used the money in Syria to finance weddings and cars for fighters.

The men also used a Skype account to communicate with Roble and Nur abroad, according to testimony.

Another witness in the case testified that Roble's social media accounts contained images of guns, other fighters and posts about how Roble felt blessed to be in "sham" - a term for a territory that includes Syria.

Wilbur Fluegel, the attorney who represented Roble in the bridge collapse litigation, said he doesn't know what Roble has been doing, saying he last worked with him in 2009. Fluegel could not reveal how much money Roble has received, citing confidentiality clauses.

But in that 2009 order, a judge approved a $53,500 settlement from the state of Minnesota to be invested in an annuity to pay Roble a lump sum of $65,431.22 on his 18th birthday. It was unclear if Roble collected all of the money, but he would have had access to the account and control of the funds. Roble was also listed as a plaintiff in two other lawsuits stemming from the bridge collapse, but the outcomes of those are confidential.

Records show Roble's parents believed he was having a hard time dealing with the disaster, and that he did not follow through with counseling. Records from an initial session show Roble met the criteria for post-traumatic stress disorder and "believes he is a jinx, and that there is something wrong with him."