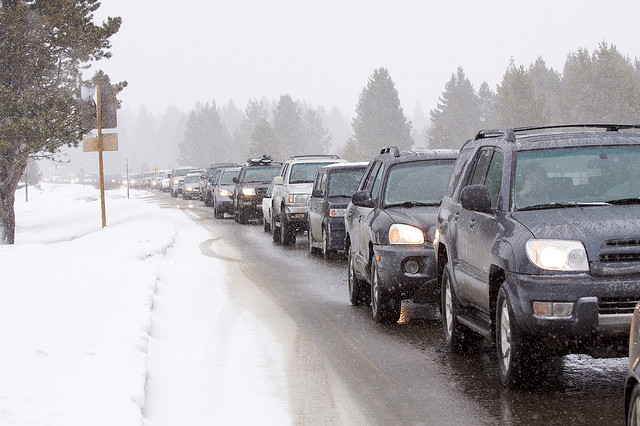 AUSTIN, Texas The nation's commuters are adapting to increasing traffic congestion by building delays into their schedules, but at a cost of $121 billion in wasted time and fuel, according to an annual study of national driving patterns released Tuesday.

The new report from the Texas A&M Transportation Institute found that Americans wasted an average of $818 each sitting in traffic in 2011. That also meant more carbon dioxide entering the atmosphere.

The worst commute in the country? Washington. Commuters in the nation's capital needed almost three hours for a trip that should take 30 minutes without traffic, according to the report. That compares to the least congested city — Pensacola, Fla. — where commuters needed only nine extra minutes.

On average, Americans allowed for an hour of driving time for a trip that would take 20 minutes without traffic. The total nationwide added up to 5.5 billion additional hours that Americans spent in their cars during 2011.

The institute, part of Texas A&M University, uses 30 years of traffic data, and its annual reports are one of the key tools used by experts to solve traffic problems. Researchers study how commuters adapt their travel plans when they have urgent appointments in highly congested areas based on data gathered from state transportation agencies, private companies and academic entities that monitor traffic issues.

When all costs are totaled, the cost of traffic congestion to Americans was up $1 billion over 2010 for a total of $121 billion. For commercial truck drivers alone, wasted time and diesel fuel amounted to $27 billion.

The statistic "points to the importance of implementing transportation improvements to reduce congestion," researcher and co-author David Schrank said.

The study also determined that Americans burned 2.9 billion gallons of gasoline while sitting in congestion, a slight improvement over the peak in 2005 when commuters wasted 3.2 billion gallons.

Researchers said 2005 remains the worst year recording for traffic congestion, but warn that recent improvement may be directly related to the recession. As the economy picks up again, the study's authors warn, so might road congestion.

The institute notes that every community is unique and requires different, multi-faceted approaches to solving congestion.