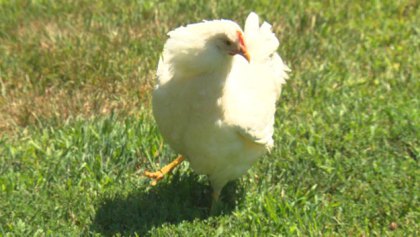 BOSTON -- A woman in Boston wants to pay for surgery for a chicken because she thinks it is the only alternative to euthanizing the bird, reports CBS Boston.

Cecily is a 3-month-old chicken with a bum leg caused by a slipped tendon that wasn't fixed when she was a chick. Surgeons at Cummings Veterinary School at Tufts in Massachusetts are poised to help Cecily walk again.

"It started to allow her leg not to grow properly and bend her leg around. So it's basically useless for her right now," said Andrea Martin, a chicken rescuer from Clinton, to CBS Boston.

Martin found a new home for Cecily, but says the hen can't live a proper chicken's life with only one good leg.

"She can't roost. She can't really do anything a normal chicken can do," said Martin to CBS Boston.

Because of this, Andrea and Cecily's new owner are fronting the $2,500 bill for a prosthetic leg for the chicken. The amputation surgery is planned for the Cummings Veterinary School at Tufts, probably later this week reports CBS Boston.

Martin explains while the chicken is sedated, using a CT scan, a copy of her good foot will be made. Then it will be submitted to make a 3D-printed, plastic prosthetic.

"They deserve a good life. They deserve everything," said Martin about Cecily. "So we don't see any other option other than giving them what they need."

Cecily won't be the first bird to receive a prosthetic leg, but she will be the first of her kind at Tufts, according to Martin.