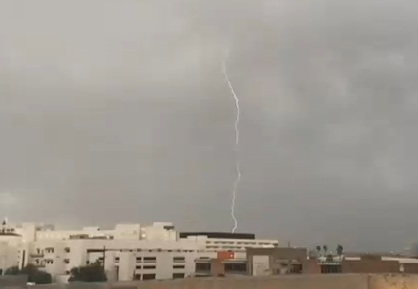 BUCKEYE, Ariz. -- Authorities say a man remains hospitalized at a Phoenix burn unit after being struck by lightning while horseback riding.

The Maricopa County Sheriff's Office says the 31-year-old man was in a Phoenix suburb around 3:30 p.m. Saturday when lightning struck.

According to deputies, the man and two relatives were riding home after they observed a storm moving in.

The lightning then hit, killing the man's horse instantly.

"A big old sound and crack in the sky," said area resident Robert Beaver to CBS affiliate KPHO. "I saw sparks fly right under the shed."

Beaver was a Buckeye Valley Fire Department volunteer firefighter for 18 years. He gave the victim CPR. He told KPHO the victim had no pulse.

"The lightning hit him and the horse. He had a cowboy hat on that blew apart," said Beaver.

The rider suffered burns on his upper body.

Deputies say he was transported from the Buckeye area to Maricopa Medical Center in critical condition.

"He had a lot of burns on his body," said Beaver.

Authorities say they expect the man to survive.