The Rays have some help coming in the near future. Tampa Bay got Alex Cobb back from the DL today. That's great news for a Rays club that has been try to keep their heads above water while they wait to get as close to full strength as they can this season. The season that was supposed to be so full of promise has been a nightmare. A beleaguered pitching staff, defensive lapses, and hitters pressing up and down the lineup have led the Rays to the bottom of the AL East. Ben Zobrist is close to coming back and Hellickson is starting to throw off the mound. The Tampa Bay Rays have been in holding pattern for the last month waiting for the boys to get healthy. Will it be enough to over come the hole they have dug for themselves, I am not sure.

Now is the time for Andrew Friedman to think outside the box, I mean really outside the box. Is there anything out there available that can jumpstart the Rays. He could deal David Price, but by doing that he is simply reshuffling his cards at this point of the season for a bat rental or minor leaguers. Losing Price would leave an even bigger gaping hole in their rotation. Dealing Price right now doesn't make sense unless you get a kings ransom in return.

The Rays are always scouring the waiver wire to see what might be out there to be picked up on the cheap. Former Ray Jeff Keppinger was just placed on waivers, should the Rays try to bring him back? If I were Andrew I would take a chance on bringing him back. Will it turn out to be like Carlos Pena or Dan Johnson, who knows it might be, but you can never tell. Friedman has picked up hitters off the waiver wire before grabbing Hank Blalock and Brian Hawpe in 2010. Funny thing is, with a lot of the players the Rays have picked up, they have rejuvenated their careers. And even more odd not many that have left the Rays have gotten better once they left the club

The one person I wouldn't mind the Rays calling today is Scott Boras. Boras had two players that didn't find work once the season began. One was Stephen Drew who turned down a deal with the Boston Red Sox. After months of looking or a job, he finally returned to the Red Sox this week. Unfortunatly the deal he took this week was a millions less that the Bo Sox offered him this off-season.

Right now he is still looking or a job. The Rays have already lost several million on the contract with Heath Bell and I know this is already the most expensive team the Rays have put on the field. So if they are in for a penny why not go in for a pound and take a run a Morales.

He would be a second bopper to go along side Longoria while we wait for Will Myers' home run swing to get going. He could be your everyday DH. He could be the protection in the lineup for the Longoria the Rays never seem to have. How much would he cost? I am not sure, Stephen Drew signed a one year deal for 10.4 million. He already turned down a 14.1 million offer during the off-season. His deal with the Rays would pay a prorated 3/4 of his season salary. Would it be worth it, yes because the season is on the brink of being lost if it hasn't already. For a season that was so full of promise desperate times call for thinking outside the box.

What ever it is going to cost, I think it is worth the call to see if something can come of it. Because the alternitve is a lost season with David Price a year closer to walking as a fee agent. 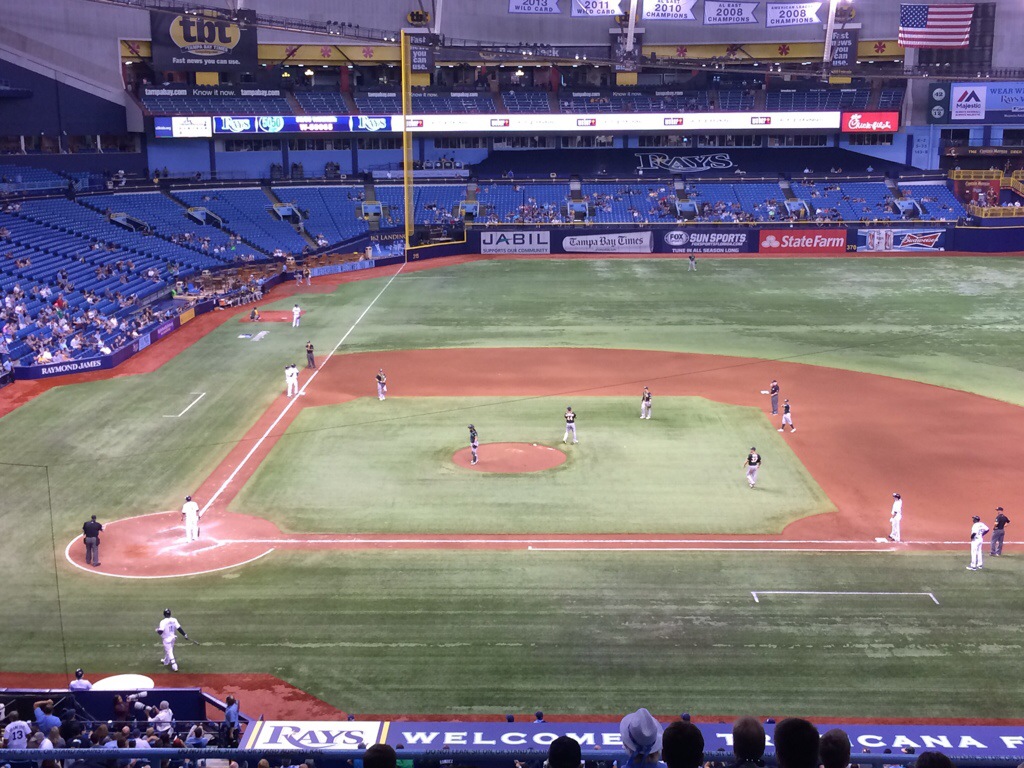