In this week's That Thing You Missed:  A brawl breaks out at Macho Comacho's funeral, Braylon Edwards cooks his goose with a Tweet And DeAndre Jordan enjoys using a fart machine on people in his spare time.

DeAndre Jordan Is Horsing Around

If you were the emerging star center of the Clippers how would you spend your spare time? Popping bottles at the latest and greatest LA Lounge? Obvi!

Well, that’s not exactly the case for DeAndre Jordan.  Instead, the nearly seven-foot wonder has been trolling Venice Beach pretending to fart on people – and attempting to scare people by wearing a horse mask – and it’s all caught on tape for the web series Got ‘Em.

His scare tactic skills are so horrific – he couldn’t even rattle Eric Berry.

Well, Of Course This Happened 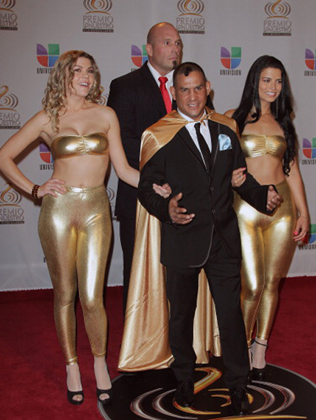 What better way to celebrate the flamboyant life of boxing great Hector “Macho” Camacho than with a fight, am I right?

Well, between two of his girlfriends.

Literally, over his dead body.

The level of class the boxing world continues to attract never ceases to amaze me. 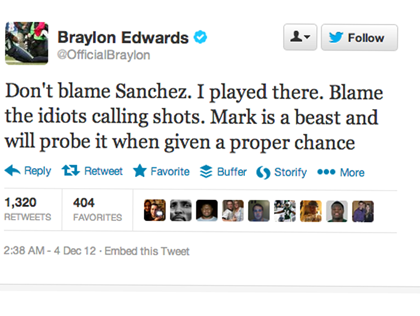 It’s been a rough few weeks for Mark Sanchez, but at least one NFL player is strongly defending him.

Unfortunately, that player is one-time Jet Braylon Edwards.  And to make matters worse he did it via Twitter and managed to piss off Gang Green’s front office by calling his former bosses “idiots.”

Interestingly, Mark Sanchez still has a job.  Edwards, alas was released from his position with the Seattle Seahawks the day after the Tweet was sent.

Even more amusing, Edwards then apologized for defending Sanchez, but never deleted the offending Tweet.

Seriously, If Roger Goodell really wants to protect his players – he’d ban them from Twitter.

Every year Timberwolves' All-Star Kevin Love teams up with the Salvation Army to inspire fans to donate new and gently used coats.

Which is awesome, 'cause I totally encourage athletes to give back to the community.

Now stage a photo op and call it a day.

Only, Love decided to release this – a video you won’t be surprised to hear he wrote and produced himself.

Genius:  What a better way to prod people into donating their new and gently used coats than by dressing like a 42nd Street flasher.

Clearly, Love and DeAndre Johnson share the hobby of self entertaining.

And, fortunately for the cast of Saturday Night Live, no one has to be worried about losing their job.

The ABC's of College Basketball

What do you do if your're the Indiana Hoosier's basketball coach making two mil a year and you drop your gum on the court?

Well, if you're Tom Crean you pick it up and put it back in your mouth.

When asked, Crean noted the "5 second rule" was in effect.

That Thing You Missed:  Why is Cedric Benson a Strip Club DJ and Why Are NFL Cheeerleaders Shaving Their Heads?

That Thing You Missed: A 'Bear' Naked Tweet, A NASCAR Brawl and No Horsing Around for Eric Berry

That Thing You Missed: At Least Mike Vick's Brother Has His Back; Peyton Manning Luckiest Guy in NFL?

That Thing You Missed:  LT Tackles Tebow with Relationship Advice