When discussing whether a play is dirty or not, it's difficult to decipher between dirty and aggressive. This is particularly true when examining football. Pro Football has a rich history of "bad boys" and "assassins" that some may have deemed "dirty" when in reality they were just playing tough.

Football has changed significantly over the years and the game is very different today than when guys like Jack Tatum played in the '70s. Tatum is known for a violent hit against Darryl Stingley that left Stingley with a spinal cord injury that caused quadriplegia. That type of hit, helmet to helmet, is now outlawed. The difference between Tatum and some of the following players is the lack of vicious intent. Tatum's hits were violent, but in no way were an attempt to injure and has said he is haunted by the hit on Stingley.

"Dirty"plays to me are those that are after the play, vicious and have an intent to injure. Here is my list of the dirtiest players in football history. 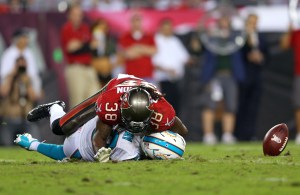 The hardest choice in a list of five is always number five. Dashon Goldson earns this spot by leading all players in unnecessary roughness penalties since 2009 with 20.  He's a head-hunting safety who in 2013 received three fines totaling $190,000 and was suspended for being a repeat offender. 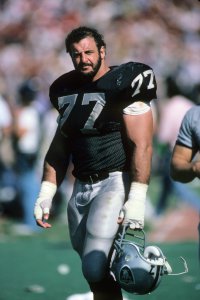 This roid-raging mammoth of a man terrorized the league from 1971-1985. His most terrorizing years came from when he joined the Raiders in 1982. He was absolutely vicious on the field. He once tore the helmet off of Jets' offensive lineman Chris Ward's head and threw it ten yards down field. Honestly, I'd put all players from the 1980's Raiders on this list.

3. Conrad Dobler Conrad Dobler was a master of intimidation. He'd play clean in the first quarter of a game just so the defense would be worried about his upcoming move. He was labeled "Pro Football's Dirtiest Player" in 1977 and one of football's top characters as seen in this video. 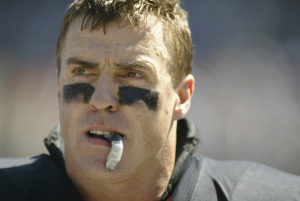 Do you happen to remember how I mentioned roid-rage? That applies here too. Bill Romanowski was known to get "spitting" mad. If you know the story, you would have caught what I did right there. On Monday Night Football in December of 1997, J.J. Stokes of the 49ers got in an argument with Romanowski and the Broncos linebacker responded with spitting in Stokes' face.

Suh is the dirtiest player football has seen in a long time. He's very talented but also has a vicious side that can potentially get someone hurt. He has been disqualified, fined and suspended for his actions and will continue to be monitored for more disciplinary action. I won't be surprised if the fines and suspensions keep coming. The following montage is some of Suh's greatest hits in his dirty play collection.

As you can see, Suh tries to rip Jay Cutler's head off.

Here he is again, but this time Jake Delhomme is the victim.

And finally, a nice stomping of Evan Dietrich-Smith.