POLK COUNTY (PCSO/CW44 News at 10) - Fourteen suspects were arrested by the Polk County Sheriff's Office on Wednesday, May 13, 2020, at a gambling and rooster/cock-fighting event in Mulberry, Florida. Deputies responded to 107 Cesara Drive, and observed the male suspects gambling, rolling dice, and exchanging cash around a wooden table. A 10-year-old child was also present. On the ground around the table, deputies observed bags of a white powdery substance that tested positive for cocaine. Nearby they saw evidence of a recent cock-fight, and they requested that detectives from the PCSO Agriculture Crimes Unit respond to the scene.

Ag Crimes detectives obtained a search warrant for the property, and located seven dead roosters laying on the ground approximately 25 feet from where the gambling was occurring. Nearby, detectives found a disassembled fighting ring, a scale for weighing roosters before fighting, and chairs for people to sit and watch the fighting. Where the ring was set up, there were fresh feathers on the ground and stuck to the sides of the ring. Inside a shed on the property, detectives found rubber boxing gloves used to train roosters to fight, knives that are strapped to roosters' legs for fighting to the death, and performance-enhancing drugs for roosters. A 55-gallon metal trash barrel contained burned bodies of dead roosters. 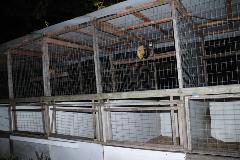 There were over 100 live roosters individually housed, and a total of 481 roosters and chickens were removed from the property during the investigation.

The resident of the property, 32-year-old Jonathan Adam Simouth, told detectives that a fight occurred earlier that evening, and gambling with dice took place after. Detectives found a trafficking amount of cocaine, and two loaded firearms (an AK-47 and a 12-gauge shotgun). Simouth is being charged with:

"We received a call for service regarding a cock-fighting event, and found so much more, including a small child in the presence of cocaine and firearms. This is egregious on several levels. I'm glad we were able to shut this down." – Grady Judd, Sheriff 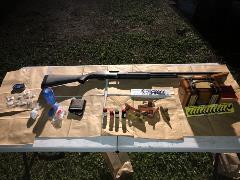 All 14 suspects were transported to the Polk County Jail in Bartow. The child was turned over to his parents, who are neighbors and were not present at the event.