The definition of what makes a geek has evolved in the last decade. It used to be that if you played chess or partook in trivia games, you were clearly in a group that the majority felt the need to mock in some form or fashion. If you weren't an athlete and/or did not care to attend trendy social events, you were automatically branded an outsider and were forced to take your guilty pleasures elsewhere. But the times have changed in the last decade or so and the geeky things once shunned by many in their youth are part of regular nightlife entertainment ventures. Here are a few places where one can indulge in once misunderstood geek activities.

Apparently once you hit double digits in age, many kids thought it was no longer cool and/or acceptable to have birthday parties at places such as Chuck E. Cheese. What were they thinking? Game Time is the modern-day version of the kid friendly video arcade. While it has the old-school, point-a-gun-at-the-screen fun and the traditional arcade machines, it also has interactive games such as the classic air hockey and skeeball to the more present day technology shenanigans where one has to use your entire body to play a game. While the place is family oriented, chances are you see more adults running around than kiddies.

For those who want to unleash their inner geek yet don't want to feel out of place, this South Tampa weekend hot spot is the ideal setting. The latest fad is cornhole, but this bar turns back the clock and brings classic board games to life and super sizes them. For example, on any given night, or day for that matter, a group of friends can relive the basic strategy game of Connect Four. They can even battle on a couple of life-sized Jenga platforms where one needs two hands to carefully pull the blocks out of the tipsy structure. What makes these types of games more interesting as an adult you ask? How about the added element of alcohol?

This link will bring one to a warp zone of board game ecstasy. A plethora of groups in the Tampa Bay area have sprung up for weekly/monthly get-togethers for one reason: to play board games. From Monopoly, Scribblish, Battle of the Sexes and Scattergories to the hardcore multi-hour battles found in strategy games like RISK, these people are seasoned, and most importantly, loyal to their scheduled nights. In other words, it's quite rare that a board game meetup ever gets cancelled, for these open-invite crews are passionate about their gaming.

A night of go-kart racing, miniature golf, playing a few classic arcade games from the '80s and, if one really wants to shake things up, bouncing in a bungie dome and playing paintless paintball may not be the nerdiest thing one could do. It's probably just considered immature, for some may say, "grow-up!" at the suggestion of doing that as a date night. But if you can find a roaming soul that digs any of these activities, bring them to this full-service castle and enjoy the ride.

This quaint country-western bar houses the nerd sport athletes often write off as a "real" sport: ping-pong. Yep, it's all about ping-pong here, folks. Right in the middle of the joint is a solid wooden table that looks like something the Gods of Olympus would play on. And the owners of this western sports bar seemingly designed the rest of the place around it, so dedicated players wouldn't have to worry about running into nearby patrons and spilling their drinks while chasing after balls. 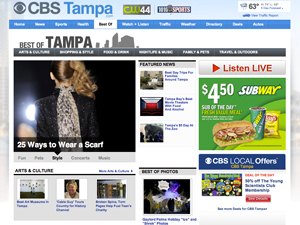 Joe Belcastro is an established journalist based in Tampa, Florida. His vast coverage of the local, national, & international scene has led his work to appear all over the world in respected print and online publications. After making a name for himself in the realm of film criticism, his candid approach & style to reporting has enabled him to cover such beats as music and nightlife, all while conducting interviews with people who have way more money than him. His work can be found at Examiner.com.