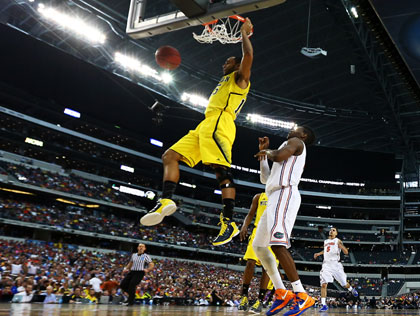 The Final Four teams heading into the NCAA tournament are an interesting mix, to say the least.  From a Big Ten team with the one national player of the year candidate still in the running to the one remaining number one seed who now has the nation on it's side thanks to a horrific injury, we’ve seen it all.  And we can’t rule out the shocking Cinderella team or the old school Big East beast with the beloved coach.  And while all these teams are all remarkably different – they all have the same goal.

So here’s a look at what we think the Final Four’s theme songs should be.

The Cardinals came into the tournament the #1 overall seed and have played like it.  They are rolling through the tournament on a mission, and the injury to Kevin Ware has only added more fuel to the fire.

When the Wolverines offense is clicking on all cylinders like it was against VCU or more recently, the Gators, there’s no other way to describe this team lyrically than by saying “You’re a shooting star I see, a vision of ecstasy, when you hold me, I’m alive, we’re like diamonds in the sky.”

Okay, this one seems kind of obvious. The Orange is the lone team from New York still in the field and making a run.  Yes their school is nowhere near NYC, but with Coach Boeheim's notoriously scary defense the lyrics seem fitting: “so they can step out of bounds quick, the sidelines is lined with casualties.”

This team loves to grind games out and muck it up with their opponents and many people didn’t think they would make it past Pitt in the first round, much less beat Gonzaga in the Round of 32, or the Buckeyes in the Elite Eight.  Well Shockers, this is for you: “Hey, this is a song for my haters; y’all got me feeling like the greatest.”