Chef Frank Brunacci is holding court at the Australian Truffle, one of the roughly three dozen 20 x 20 foot booths within Chow Town, the line of food vendors that stretches down Columbus Drive at Lollapalooza 2012. (Though according to Brunacci’s t-shirt, which seems to have been the recipient of some homemade augmentation, we are actually at “Trufflepalooza 2012.”)

Given the day’s sweltering temperatures many in attendance here probably wish the chef were in fact about to conjure a downpour. But he offers something possibly better: Brunacci has come to Lollapalooza bearing a whopping 45 pounds of black truffle, which he has infused into the butter slathered onto his corn on the cob, the brie melted within his grilled cheese sandwich and the thick sauce that binds the elbow pasta in his macaroni and cheese. And if a customer desires even more of the sumptuous fungi shaved fresh onto any of these offerings? Then the chef will, as he says, “make it rain.”

Brunacci may not be slinging standard rock festival fare here, but neither are most of his neighbors in Chow Town. The extensive food court is the brainchild of Chicago chef and Lollapalooza Culinary Director Graham Elliot, who curates the festival’s lineup of vendors, all of whom hail from Chicago and its surrounding areas. Elliot and his team are always on the lookout for chefs whose creations will work well in a festival setting -- “anything you can put on a stick is always good,” he says -- but that also deviate from the basic, and often boring, festival selections.

RELATED STORY: Lollapalooza - A Culinary Delight Thanks To Graham Elliot

Sometimes, it is the dishes that on first glance appear the most far-out that are actually the most appropriate. At the booth run by Chizakaya, which bills itself as a “Japanese pub,” festival-goers can munch on bacon-wrapped hot dogs and sweet-potato French fries, but also something called a Takoyaki, essentially an octopus beignet. Odd? That depends on where you live. “It’s a typical street food in Osaka,” explains Dino Arriola, Chizakaya’s Chef de Cuisine. “So we thought it made perfect sense to bring it to Lollapalooza.” 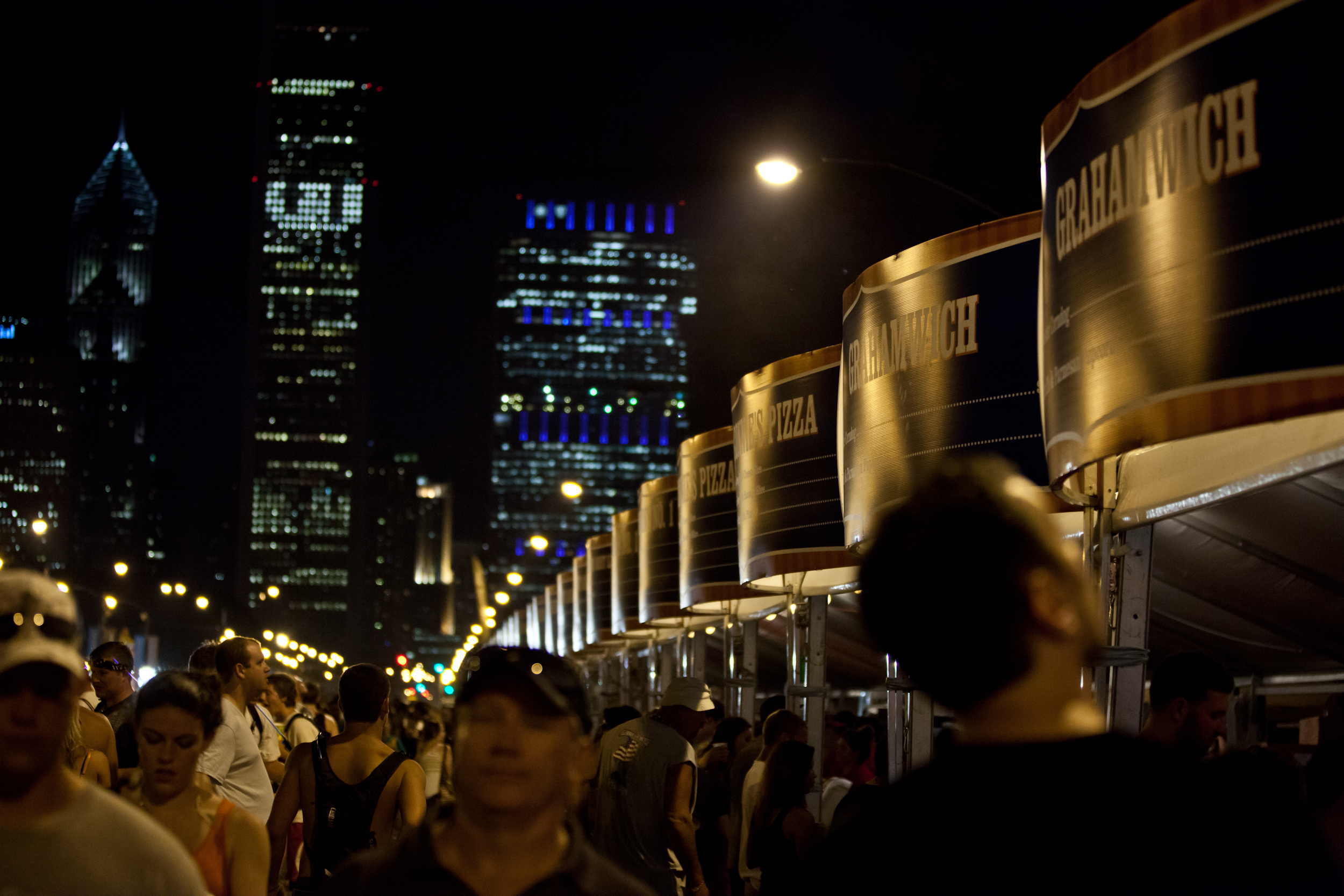 For the less adventurous, even culinary standbys come with great rewards. Among the selections at Kuma’s Corner is a five-ounce burger topped with a jalapeno corn salsa and paprika crème fraiche. Like all of the booth’s offerings, the creation has a name derived from a Black Sabbath song title, in this case “Electric Funeral,” and is served by a staffer in a specially-designed Kuma’s shirt that is a takeoff on the cover of the veteran metal band’s classic 1972 album, Vol. 4. Explains Kuma’s Corner Executive Chef Luke Tobias, “Black Sabbath is headlining today and for me that’s monumental.” The chef also reports that the restaurant is bringing 4,500 pounds of beef to Lollapalooza. The meat will be cooked throughout the weekend on six massive grills pumping a combined total of a million-and-a-half BTU’s, according to Tobias.

But despite Chow Town’s varied offerings, this is still Chicago. And for many festival-goers that means one thing when it comes to good eats: deep-dish pizza. The booth for local chain Connie’s Pizza (http://www.conniespizza.com) was bustling throughout the first day of Lollapalooza, serving up thick slices of cheese and sausage deep dish, as well as a gluten-free margherita variety that Connie’s General Manager Russ DiVincenzo says has been a big hit with the crowd.

Indeed, whether festival-goers are in the mood for cuisine hailing from the pizza parlors of downtown Chicago or the streets of Osaka, chances are that for the next few days it can all be found along Columbus Drive.

Apparently, there is also some great music to be heard there as well.