This World Series featured some of the most dramatic and unusual endings in history, but in the final game, things were pretty straightforward. The Red Sox jumped out to a 6-0 lead after four innings and never relinquished it, ultimately winning 6-1 to capture their eighth World Series title. Here are five things you didn’t’ know about the game.

1. The Red Sox clinched the championship at home for the first time since 1918. That is easily the longest ever between home World Series clinching — the previous record was held by the Detroit Tigers, who did not clinch between 1935 and 1984.

Boston’s victory marked its third World Series title over the past 10 years, the most in that span. The Red Sox are only the second team in baseball history to go from last place to champions, joining the 1990-91 Minnesota Twins. The BoSox now own a 45-28 record in Fall Classic games, which is the best among teams that have appeared in more than 15 contests. 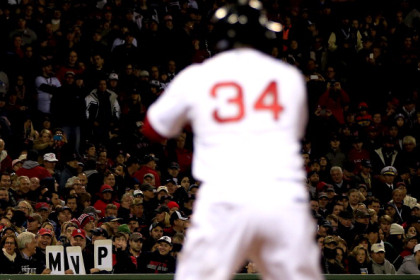 2. David Ortiz did not get a hit in Game 6, but he did draw four walks and score two runs en route to the MVP Award. Overall, Big Papi posted a .688 average with a .760 on-base percentage in six games, both of which are second only to Billy Hatcher (1990) in World Series history. Ortiz reached base 19 times, trailing only Barry Bonds (21), and his 1.188 OPS ranks ninth all-time.

At 37 years old, Ortiz became the third-oldest World Series MVP behind Randy Johnson (38) and Willie Stargell (39). He is the second player in five years to earn MVP honors while primarily playing DH (the other is Hideki Matsui in 2009) and only the third ever to do so (Paul Molitor first accomplished the feat in 1993).

3. Before smacking a solo homer in the fourth inning that essentially sealed the game, Stephen Drew had gone just 4-for-51 in the postseason. It’s no surprise that he came through with an important hit at home, however; Drew batted just .222 with a .687 OPS on the road this year, but posted a much better .283 average and .858 OPS in Fenway Park.

Drew and his brother, J.D., are the only players to go deep in the postseason for the same franchise. During his time with Boston, Stephen’s under-appreciated older brother hit .322 with four long balls in 28 postseason games. 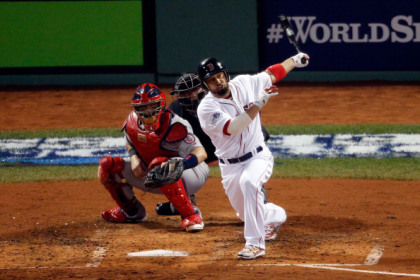 John Lackey pitched the clinching game, becoming the first pitcher ever to start and win the clinching game of a World Series for two different teams (he also clinched for the Anaheim Angels as a rookie in 2002). The only other pitchers to earn World Series-clinching games for two different squads are Jimmy Key (1992 as a reliever for the Toronto Blue Jays and 1996 as a starter for the New York Yankees) and Catfish Hunter (1972 as a reliever for the Oakland A’s and 1978 as a starter with the Yankees).