There was no crazy ending in Game 5 of the World Series, but it was still another close contest. Jon Lester and Adam Wainwright both pitched like the All-Stars they are, but ultimately Lester triumphed once more as the Red Sox took a 3-2 series lead before heading back to Boston. Here are five things you didn’t know about the game.

1. Jon Lester was brilliant once more, allowing just one run on four hits over 7 2/3 innings. Before surrendering a home run to Matt Holliday in the fourth inning, he put together 16 1/3 scoreless innings in the Fall Classic – the third-best mark ever to start a career. The left-hander also became the first pitcher to win his first three World Series starts since Jack Morris, who was known for showing up in big games.

Lester joins Babe Ruth as the only two Red Sox southpaws to tally three wins in the World Series. The Babe was a little bit better at the plate, however, as Lester is now 0-for-36 at the plate during the regular season and postseason. 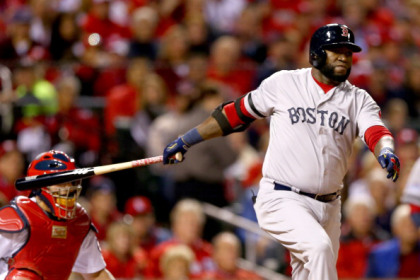 2. David Ortiz continued to swing a bat hotter than doughnut grease, collecting three more hits in four at-bats and tying Dwight Evans for the most World Series RBIs in history. He also tied a Fall Classic record by reaching base in nine consecutive plate appearances, though that streak finally ended when Big Papi lined out in the top of the sixth.

Ortiz’s 11 hits in this World Series are only two short of the record held by Lou Brock, Marty Barrett and Bobby Richardson. The latter is significant as the only player ever to win the World Series MVP despite playing for the losing squad (though he did so in a different year than the one in which he tied the hits record). If Ortiz continues his ridiculous run at the plate, he could earn MVP honors even if the Cardinals manage to win two games on the road.

3. Adam Wainwright fanned 10 batters in Game 5, recording his first six outs via the strikeout. He is the first Cardinals pitcher to whiff that many players in the World Series since Bob Gibson did so in Game 4 of the 1968 Fall Classic (notably, Gibson struck out 10 batters on five separate occasions in the World Series, including a record 17-whiff performance in Game 1 of the ’68 series.)

However, Wainwright’s game might have to be discounted a little because of the strikeout-heavy nature of the Red Sox. They set a franchise record with 1,308 whiffs during the regular season and now hold the postseason record (155) after fanning 14 times on Monday. The previous high mark was held by the 2010 San Francisco Giants, who were punched out 142 times. 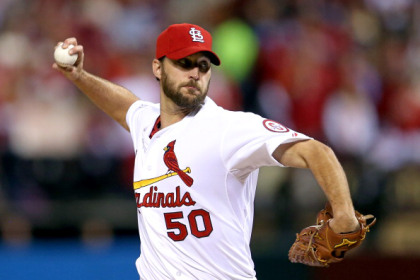 4. Koji Uehara was dominant once more for the Red Sox, striking out two over 1 1/3 perfect innings to earn his seventh save of the postseason and second of the World Series. He has allowed just one run over 12 2/3 playoff innings (0.71 ERA), fanning 15 while surrendering just seven hits and no walks. Uehara has not walked a batter since August 3, compiling 37 2/3 frames without a base on balls.

5. The math obviously says the Cardinals are in trouble, and history agrees. Of the 40 teams to lose Game 5 and go down 3-2, only 14 have prevailed to win the World Series. Then again, the last team to do that was the Cardinals only two years ago — they came back against the Texas Rangers thanks to clutch hitting by David Freese in Game 6 and strong pitching by Chris Carpenter in Game 7.

And of course, Boston has notoriously been on the losing side of such a match-up. The last time the Red Sox had a 3-2 lead in the World Series was 1986, when they ultimately lost to the New York Mets in seven games. Bill Buckner made an infamous error in Game 6 of that series, something the Red Sox will surely hope to avoid on Wednesday.