The World Series was touted as a battle of baseball’s best — the two most dominating regular-season teams squaring off in what promised to be a close match-up. But in Game 1, things were anything but close, as Jon Lester and David Ortiz led the Red Sox to an 8-1 romp over the Cardinals. Here are five things you didn’t know about the game.

1. With the win, the Red Sox have now taken nine World Series games in a row, last losing in Game 7 against the Mets in 1986. Boston started the streak by sweeping St. Louis in 2004 and continued it by routing the Colorado Rockies in 2007. The latest victory ties the Red Sox with the Cincinnati Reds for the longest active World Series winning streak, though the Reds haven’t been to the Fall Classic since 1990. 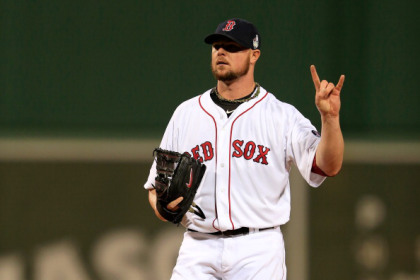 2. After tossing 7 2/3 shutout innings on Wednesday, Jon Lester has totaled 13 1/3 career innings in the World Series without giving up a run (two starts). Only two other pitchers have put up goose eggs in their first two World Series starts: Hall-of-Famer Christy Mathewson and Giants phenom Madison Bumgarner.

Lester is also one of only three lefties to start Game 1 of the World Series for the Red Sox. The other two? Bruce Hurst and some guy named Babe Ruth. Combined, the trio limited opponents to 15 hits and no runs in their Game 1 starts (23 innings pitched). Overall, Lester holds the Red Sox record with five career starts in Game 1 of a postseason series. He has recorded a quality start in each of those outings, compiling a minuscule 1.56 ERA (six earned runs in 34 2/3 innings).

Lester has won the Red Sox’s last two World Series games, as he closed out the Rockies with 5 2/3 scoreless frames in Game 4 of the 2007 Series.

3. This postseason series marks David Ortiz’s 15th as a member of the Red Sox, moving him past Jason Varitek for the club record. He is only the ninth player in team history to appear in three separate World Series for Boston and is the first to do so since three players accomplished the feat in 1915, 1916 and 1918 (the Red Sox won five of the first 15 World Series).

After going 2-for-3 with a homer and three RBIs in Game 1, Ortiz has accumulated 11 World Series RBIs. That puts him behind only Dwight Evans (14) for the most in Red Sox history. Big Papi’s five total bases on Wednesday also pushed him past Reggie Jackson for the eighth-most in postseason history (149), while his two runs scored gave him sole possession of 10th place in postseason history (46). Ortiz’s longball tied him with Carlos Beltran for eighth-most all-time in the playoffs (16). 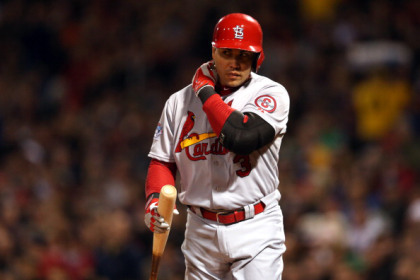 4. Speaking of Beltran, he finally made his debut in the World Series after playing in 2,064 regular-season games. Only two active players have taken part in that many games but still have not reached the World Series: Torii Hunter (2,091) and Miguel Tejada (2,171). Unfortunately, Beltran’s World Series experience might be short-lived, as he injured himself robbing Ortiz of a home run in second inning. Beltran struck out in his only at-bat on Wednesday.

5. Things look good for the Red Sox, as 21 of the past 25 teams to win Game 1 have gone on to win the series. Their dominating win also bodes well, as four of the last five teams to win Game 1 by at least seven runs proceeded to claim the World Series title.

Still, we shouldn’t count out the Redbirds just yet. Lower the victory margin to six runs, and things get more competitive: 15 teams in World Series history have won the opener by at least six runs, but only eight won it all. In fact, one of the seven teams to come back from a Game 1 drubbing was a Cardinals squad — St. Louis beat the Milwaukee Brewers in seven games after losing 10-0 in the first game of the 1982 World Series. Now, 31 years later, the Cardinals will try to repeat history.