One common knock against professional wrestling is that it's fake. Maybe so, in some ways. But it's definitely athletic, even if those roundhouse rights aren't always landing with full force. Wrestlers weighing upwards of 300 pounds routinely fly though the air. They pick up their opponents and fling them across the ring. They run, jump, hit and kick. They fall down and get up. And they do all of this in rapid succession.

What other sport requires such a varied skill set? Football. So it makes perfect sense that some of the top professional wrestlers find their way to the squared circle from the gridiron. These seven guys actually made it all the way to the NFL.

WWE contender Roman Reigns played defensive line for Georgia Tech. Leati Joseph Anoa’i, as he was known then, went undrafted after his senior year, but signed with the Minnesota Vikings in 2007. The team released him that season, and the Jacksonville Jaguars picked him up. Reigns moved on to the Canadian Football League in 2008, where he signed with the Edmonton Eskimos. He entered the ring as Roman Leakee in 2010.

Wrestling great Goldberg won the world heavyweight championship belt in both WCW and WWE, building an impressive undefeated streak in the process. But it was the gridiron that led him to the squared circle. Bill Goldberg played defensive tackle for the Georgia Bulldogs, and, in 1990, was drafted by the Rams. He spent one season in Los Angeles, the team's home at the time, and later latched on with the Atlanta Falcons. He appeared in 14 games with the Falcons in the early '90s. The Carolina Panthers picked him up in the 1995 expansion draft, but an injury kept him on the sideline. Lex Luger and Sting saw him rehabbing, and pointed him to the ring.

The name Lawrence Pfohl probably doesn't ring any bells. But this football player turned wrestler definitely rang a few bells as Lex Luger en route to multiple WCW and WWA heavyweight championships in the late 80s and early 90s. Pfohl played his college ball at Miami before venturing north to the Montreal Alouettes of the CFL. He became a Green Bay Packer in 1982, though never made it off of injured reserve. The Packers cut him in training camp the following season.

Wrestling legend Ron Simmons held multiple titles in his day, including the WCW United States and World Tag Team and Heavyweight titles and the WWF Tag Team title. He is a 2012 inductee into the WWE Hall of Fame. Before wrestling, Simmons was an All-American defensive tackle at Florida State, anchoring the defense for Bobby Bowden, D1 football's winningest coach. The Cleveland Browns drafted him in 1981 in the sixth round. After his rookie season, he bounced to the now-defunct USFL for two seasons. 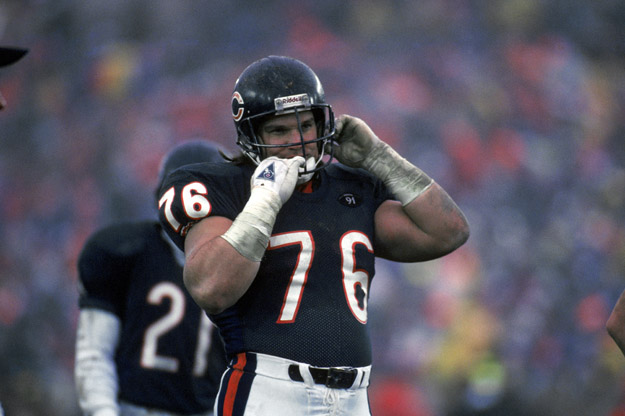 Steve McMichael is one of the few pro wrestlers to enjoy some success in the NFL, winning the 1985 Super Bowl and making the Pro Bowl twice during his 15-year career. As a member of the legendary Chicago Bears, the defensive tackle managed to play 101 straight games, an impressive feat at a physical position. His football fame parted the wrestling ring ropes for him. McMichael appeared at WrestleMania XI in 1995 before jumping over to WCW as an announcer. He was eventually lured into the ring, challenging Ric Flair as part of a tag team match. McMichael went on to win the WCW United States Title in 1997.

You may also know him as The Alpha Male or his real name, Monty Brown. Brown wrestled with NWA, challenging for the heavyweight title in 2005 and 2006, and briefly with WWE. He lost his NWA title shot against Jeff Jarret, who he later teamed up with. Before wrestling, Brown played outside linebacker for the Buffalo Bills and New England Patriots. Glory eluded him in the NFL too; his Buffalo Bills lost Super Bowl XXVIII to the Dallas Cowboys.

Leon White, known as Vader or Big Van Vader, tipped the scales 450 pounds. And he's thrown that weight around in wrestling rings all over the US and Japan for the better part of the past three decades. He won the WCW World Heavyweight Championship three times in the early 1990s -- holding it for a total of 377 days -- and feuded his way through the WWF later that decade. Before achieving wrestling stardom, White played offensive line at the University of Colorado and for two seasons with the Los Angeles Rams. His brief NFL stint included an appearance in Super Bowl XIV, where the team lost to the Pittsburgh Steelers.

Read more from the world of Pro Wrestling.

Check out other Sports Lists.