America the beautiful is about to celebrate its 238th year in existence. Time to take the day off, light up the ol' barbecue and open a cold beverage. Or there's the alternative  – turn on the TV and watch grown men and women stuff their faces with as many hot dogs as they can. We don't get it either but The World-Famous Nathan's International Hot Dog Eating Contest continues to grow in popularity as new eating techniques are created and records fall. There's probably a lot you don't know about this annual tradition so here are five things that may surprise you. 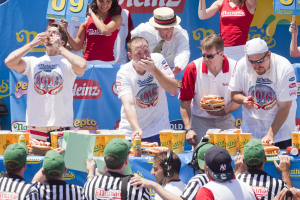 Nathan's Famous Hot Dog-Eating Contest is put on by Major League Eating and the International Federation of Competitive Eating. Qualifying competitions are held from April through June at events throughout the country. The disclaimer at the bottom of the event page reads, "All applicants must be 18 years of age or older and fully acknowledge and understand the inherent dangers and risks associated with participating in an eating contest." Check please! 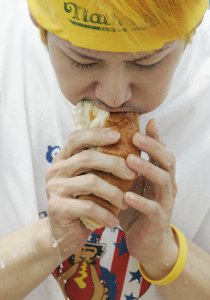 There are a number of techniques that contestants have used over the years. The most common method is "dunking"- dipping buns in water and squeezing them before eating. The "Solomon Method" was developed by the world renowned eater Takeru Kobayashi - breaking the hot dogs in half, eating the two halves at once and then eating the bun, Jumping up and down or swaying side to side have also been used - and much more fun to watch. 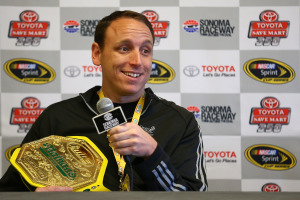 What are the contestant's competing for? Of course there are cash prizes (last year's prize was $10) and a spot on the late local news.  And then there is the award that everyone is really fighting for - the coveted bejeweled mustard yellow belt! No one can argue with its beauty, its majesty and its overpowering use of a logo. The women fight for the same belt- also bejeweled - but in pink. 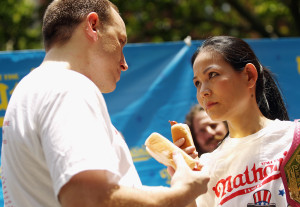 The current Hot Dog Eating Records belong to Joey Chestnut and Sonya Thomas.  Joey – who has won for the last seven consecutive years – ate 69 hot dogs in 10 minutes last year to beat his old record by one hot dog.  Sonya captured the women's record with 45 dogs in 2012. Inspiring stuff. 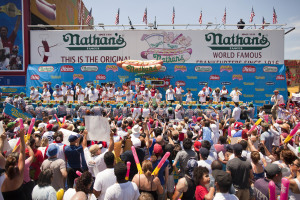 Nathan's Hot Dog Eating Contest will continue to thrive as more and more competitors try to eat their way into the record books.   Perhaps the biggest commitment to the sport – ESPN has signed on to cover the event for the next 10 years.