Most residents of Seattle appreciate this fair city for its spectacular setting, diverse nightlife and, at times, melancholy weather. But what you may not know Seattle's darker history full of haunted secrets. If you are seeking the spookier side of Seattle nightlife and places that actually go bump in the night, pay a visit to any one of these reportedly haunted Seattle bars.

If you'd dare to drink in an Irish pub that was once home to a mortuary with a questionable history, visit Kells Irish Pub at Pike Place Market. The Travel Channel's "Ghost Adventures" crew did back in 2010, and it shared some rare footage and electronic voice phenomenon recordings caught during its investigation. Many patrons who visit Kells claim to hear footsteps in various parts of the bar, even when there is no one there. The best evidence though, is a captured apparition of a small girl, who is said to be disfigured. She likes to sit on the staircase that leads to the pub's main floor.

Opened more than 30 years ago, the Il Bistro Italian restaurant and bar has been carefully nestled in Seattle's Pike Place Market. This old-world style gem is not easily found, but when you do see it, stop in and have the perfect martini. The bar top is made of a beautiful marble and the ambiance is romantic, yet eerie. Witnesses claim there are a few ghosts that reside here. They have been captured in photographs, they glide through closed doors and out from the dining room mirrors, and they even throw a few glasses to the floor to scare people with the sound effects, but somehow never break them.

The Owl 'N Thistle is another Irish pub that sits in the heart of Seattle's Pioneer Square. Originally opened in 1930 as a lunch cafeteria, this landmark bar sits directly above Seattle's underground labyrinth of creepy, abandoned tunnels. Many forget the Seattle everyone sees today is not the original city that was destroyed by fire in 1889. Some believe there are spirits trapped in the old tunnels and every so often, they will find their way up to check out the new world. The staff at the Owl 'N Thistle is frequently honored with paranormal piano playing, dark shadowy figures, kitchenware that moves on its own, and the apparition of a woman wearing an antique wedding gown and veil.

Staff members who work at the Sorrento Hotel's Hunt Club Bar and Fireside Room claim that for more than 30 years, they have had surprising visitors in the form of ghostly apparitions. The most common paranormal claims are about a lady dressed in dark, vintage clothing who carries a parasol. She wanders the halls of the hotel and bar as if she is waiting for someone or something. Guests and staff also hear unexplained footsteps, glasses moving around the bar area on their own and the elevator abruptly stopping on the fourth floor, only to find no one there.

The Orient Express Restaurant and Lounge owner describes this location as having an "eccentric atmosphere." Most would think it is because the restaurant, lounge and karaoke bar are made up of seven decommissioned rail cars. Patrons of the haunted location, however, say different. It seems the new owner will not acknowledge its supernatural residents and refuses to talk about them. In turn, overhead lights will explode for no apparent reason, scaring not only the owner, but patrons as well. Watch out when you head to the bathroom, as you will feel as though you are walking through a maze of time and space, much like something out of "The Twilight Zone." 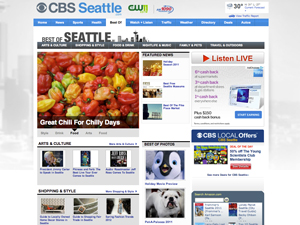 Sue Gabel has been writing entertainment and travel-related articles in the greater Puget Sound/Seattle area since 1999. She writes about music, the Seattle scene and more. Her work can be found on Examiner.com.