SANTA ROSA (CBS SF) -- A pair of smash-and-grab robbers held a customer and employees at gunpoint at a Santa Rosa jewelry store before rifling through glass display cases and escaping with an undisclosed amount of merchandise.

Santa Rosa police said the incident took place on Wednesday at 12:40 p.m. inside the downtown Santa Rosa Plaza mall. Officers responded to a 911 call and discovered upon arrival the ransacked store and shaken victims. 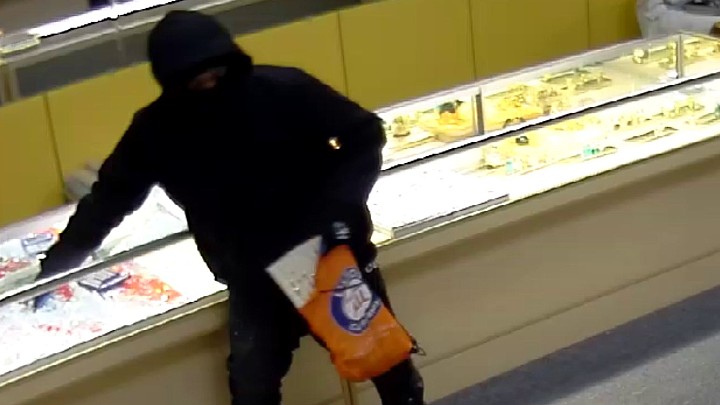 Based on the investigation, detectives believed two adult male suspects entered the Santa Rosa Plaza through a furniture store, on the south side of the building. They ran through the furniture store and directly into the jewelry store.

One suspect was carrying a handgun and made a customer lie down on the ground. The suspect then stole the customer's wallet while the other suspect broke jewelry cases and stole numerous items.

They then fled through the furniture store and out the A Street exit.

The two suspects were described as adult Black males, 5-foot-7 to 5-10 with slim builds. They were wearing all black clothing and masks that covered most of their faces.

Before the thefts occurred, investigators said, there was a late 1990s–early 2000s Lexus ES 300, black and grey two-tone vehicle driving back and forth on A Street. The vehicle had a fake license plate on the back. Detectives believe the vehicle my be involved in the robbery.

The total value of the theft will not be released, but it was in the thousands. Anyone with information about the investigation is encouraged to contact SRPD through our online Tip Line: www.srcity.org/CrimeTips.

A reward of up to $2,500 is being offered by the Sonoma County Alliance Community Engagement and Safety Rewards Fund. The reward is for information leading to the arrest of the suspect or suspects involved in this robbery.