This Saturday, the Chapel hosts a special evening that will spotlight the music of British rock royalty The Who on the eve of their festival closing headlining appearance at the Outside Lands Music Festival Sunday. Anchored by main songwriter and guitar hero Pete Townshend and vocalist extraordinaire Roger Daltrey, The Who have continued to electrify audiences with their fiery stage performances even after the passing of infamous drummer/resident madman Keith Moon in the '70s and the death of bassist John Entwistle in 2002. 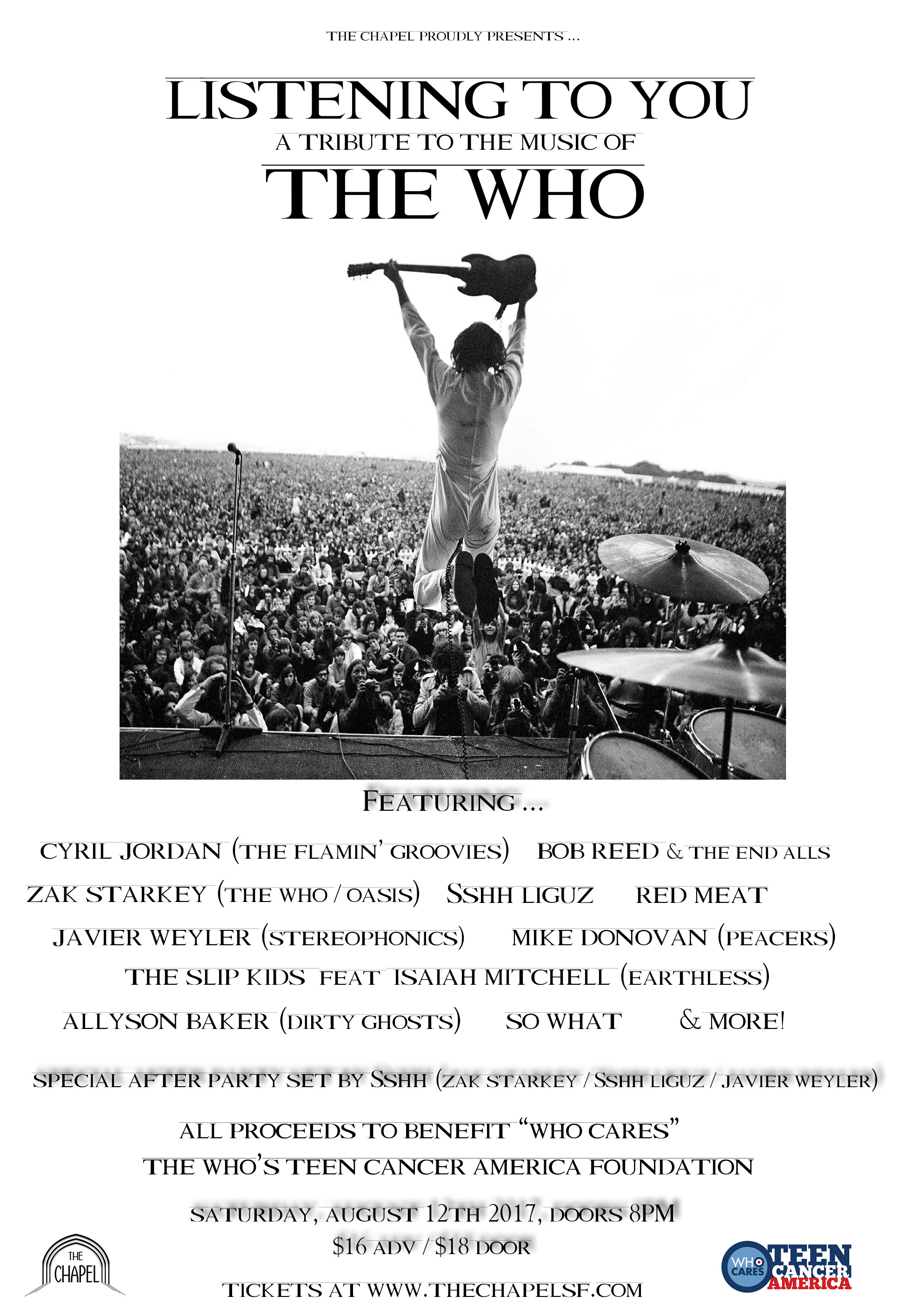 From their early mod hit singles that provided the soundtrack for a generation of disaffected youth in 1960s London through their ambitious rock operas Tommy and Quadrophenia that saw the band become one of rock's most explosive live acts, The Who has exerted a a massive influence on popular music over the past half century. While Townshend and Daltrey marked the group's official 50th anniversary in 2013, the band has been touring steadily since 2015 and shows little sign of slowing down with numerous festival appearances and the recent commencement of a residency at Caesars Palace in Las Vegas.

The group of musicians from San Francisco and beyond gathering at the Chapel for Listening to You: A Tribute to The Who not surprisingly spans an equally extensive stretch of SF history. Two notables include '60s rock great Cyril Jordan (whose band The Flamin' Groovies just celebrated their 50th anniversary at the venue last year) and Bay Area noise-pop figure Bob Reed (ex-Overwhelming Colourfast, Oranger) -- no stranger to musical tributes with his rocksteady group the Titan Ups and Cocker Power, a group recreating Joe Cocker's sprawling Mad Dogs and Englishmen-era soul orchestra. Other bands and players participating are Bakersfield-inspired Mission District country band Red Meat, Oakland glam-punk outfit So What -- who recently backed Derv Gordon, the singer from '60s London band The Equals, for a triumphant return show at the Elbo Room, drummer Mike Donovan (formerly of Thee Oh Sees and currently with Peacers) and Dirty Ghosts principle Allyson Baker.

One intriguing amalgam of local players will be Slip Kids, the band backing tribute organizer Bob Hannam that includes Bay Area guitar heavyweight Isaiah Mitchell (best known for his work with psychedelic power trio Earthless and his own group Golden Void), his wife and Golden Void partner Camila Saufley-Mitchell on keyboards, volcanic Hot Lunch drummer Rob Alper and Assemble Head in Sunburst Sound bassist Jefferson Marshall. The group will make its onstage debut at the show. Out-of-town guests joining the proceedings will be former Stereophonics drummer Javier Weyler, former Oasis member and current drummer for The Who (and the son of Ringo Starr, the drummer from another British band of some importance) Zak Starkey and Australian singer Sharna "Sshh" Liguz. All proceeds from this benefit tribute at the Chapel will go to "Who Cares," the band's Teen Cancer America Foundation.