PHILADELPHIA (CBS) -- Labor union members and leaders from across the city gathered on Thursday with the firefighters' union for a rally outside City Hall to protest the mayor's treatment of paramedics. 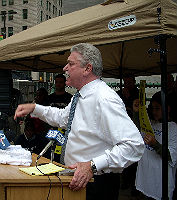 Dozens of union members gathered in solidarity to support the city's 200+ paramedics who are seeking to stay in the firefighters' union despite a state labor board ruling saying the city can exclude them (see related stories).

Harold Schaitberger (right), president of the International Association of Firefighters, took aim at Mayor Michael Nutter for leading the charge against the paramedics:

"We simply have a mayor who, through vengeance, wants to take it out on them by taking away their bargaining unit and their ability to be part of this incredible local of ours, Local 22."

"The city's current course of action has opened the door for the possibility of a paramedic strike. Think about that."

Earlier in the day, a city judge postponed a hearing on the dispute until November to give both sides an opportunity to resolve the dispute out of the courts.
Reported by Mark Abrams, KYW Newsradio.
Photos by Mark Abrams