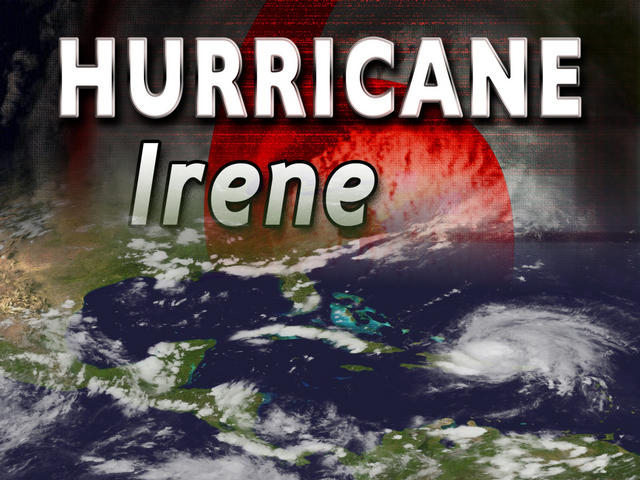 PHILADELPHIA (CBS) - Three days out from Irene's arrival in the Delaware Valley, we currently have a track that is pretty much a worst-case scenario for the region. Irene is no longer forecasted to reach CAT 4 strength, but will remain a strong CAT 3 before threatening the Outer Banks of North Carolina with landfall during the day on Saturday. Irene's passage over the Outer Banks should weaken the storm slightly, and thus it will probably retain Category 2 status before passing very close to the Jersey Shore early Sunday.

Conditions will begin to deteriorate Saturday afternoon. Irene is a very large storm and the first bands of showers will start to pass through during the day Saturday, with heavier rain developing Saturday night. It still looks likely that the brunt of the storm for us will be felt from the early morning hours through about noon on Sunday.

The current track has Irene passing less than 50 miles from the coast of New Jersey, and the latest model suites are now trending WESTWARD with the storm. This is very bad news for us, and again, poses a near-worst-case scenario. At the moment, I don't see anything that would push this storm further out to sea.

If Irene stays on its current track, we could experience tropical storm-force wind gusts in the city of Philadelphia (wind gusts 45 mph or higher) and there is the potential for hurricane-force wind gusts (75 mph or greater) down the shore. In addition, we'll have to watch for battering waves and rip currents, and a massive storm surge. The surge could reach 2-4 feet down the shore and through the bays, and this coupled with a new moon tidal surge this weekend could bring 7-10' plus into the Jersey coastline.

But by far the biggest threat will be flooding. In a month that has already nearly achieved record status, we could add 2-4" (locally 6") of rain in the city, with as much as 4-8" (locally 10") in Eastern NJ. This amount of rain will lead to devastating and widespread flooding across the region.

We will continue to track the storms progress through the weekend, but at the current time, it's my feeling that people in our area, especially from I-95 on eastward, need to be prepared for disastrous conditions from late Saturday night through Sunday afternoon, and ramifications lasting into early next week. If you can avoid travel this weekend, I would recommend it, and anyone down the shore might think about leaving early to get out of dodge before the weekend arrives.