A slew of acclaimed shows were up for Tony Awards in a remarkably competitive year, but a production that wasn't even eligible still managed to cast a shadow — well, shall we make that a web? — over the proceedings.

On a night when the hilariously profane "The Book of Mormon" reigned supreme, the famously troubled "Spider-Man: Turn Off the Dark" got attention both positive and negative at Sunday's Tonys. There was a performance — certainly rare for a show that hasn't even opened yet — plus a plug from its famous composers, Bono and The Edge. And of course, there were the obligatory "Spider-Man" jokes, without which no awards show would be complete.

There were jokes even about the ubiquity of "Spider-Man" jokes. Host Neil Patrick Harris said he would limit himself to a 30-second speed round, getting his biggest laugh with a quip about the show's ousted original director: "Julie Taymor knew it was over when she woke and found the head of 'War Horse' in her bed."

Even Bono was making jokes, saying he and The Edge "used to be famous for being in U2." Then he introduced Reeve Carney and Jennifer Damiano, who play Peter Parker and Mary Jane Watson, and a new ballad they perform in the retooled show. (As for the flying Spidey himself? Not in sight.)

Still, the breadth represented by the evening's nominees and winners showed that there's a lot going on in Broadway theater that doesn't involve comic-book superheroes. 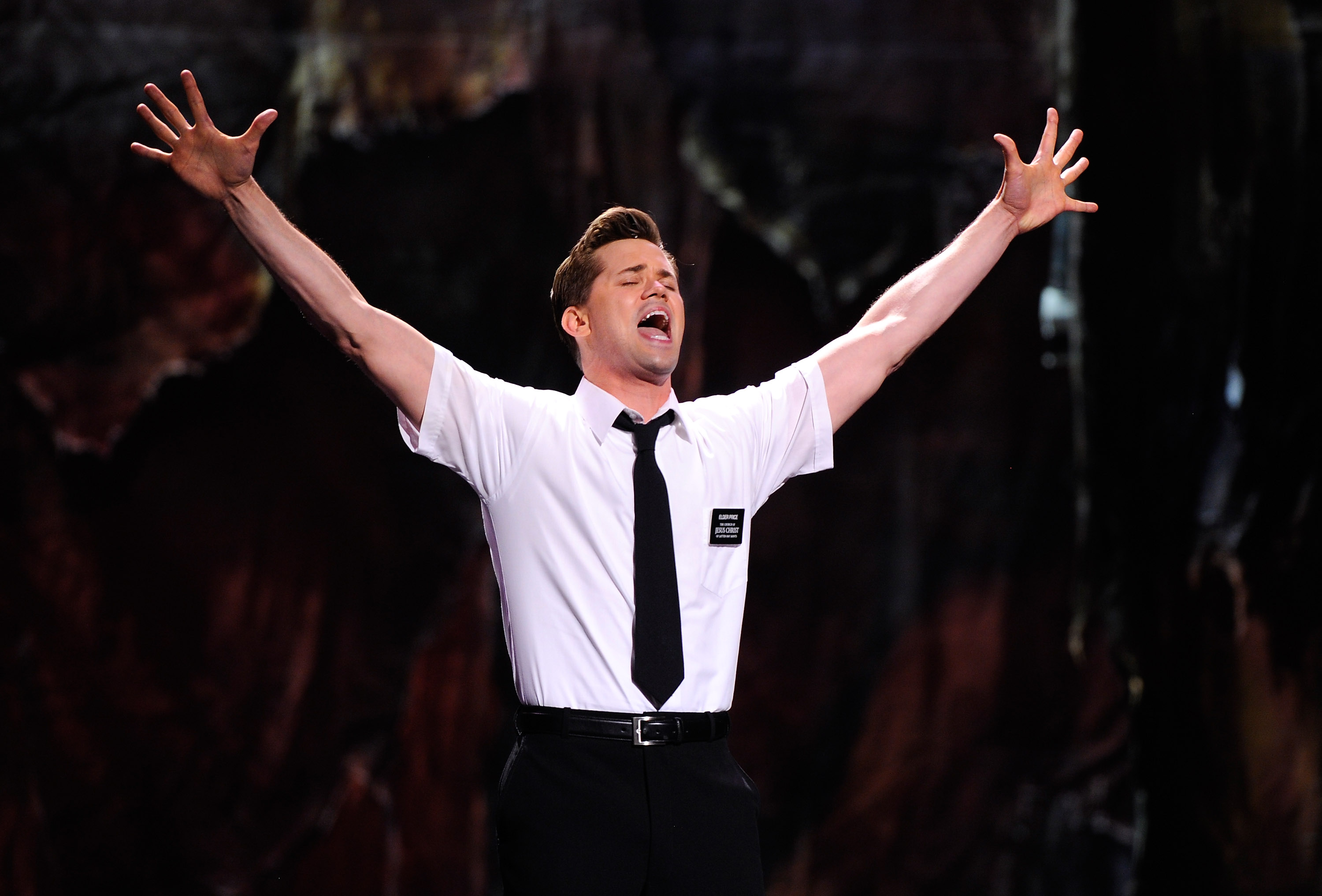 WCBS 880's Jim Taylor'd Recap of the 65th Tony's Awards: From The Red Carpet to 'The Book of Mormon' Sweep.

At the top of the heap was "Mormon," which has taken Broadway by storm this season. It captured nine awards, including best musical, for its offensive yet good-natured look at two missionaries who arrive in Uganda and get way more than they bargained for, including gun-toting warlords, whole villages infected with HIV and a running gag about maggots in a man's scrotum.

"You did it, Joseph! You got the Tony!" Parker said, looking skyward.

"War Horse," a World War I tale about horses told with wonderful puppetry, won five Tonys, including best play. The revival of Larry Kramer's groundbreaking AIDS play "The Normal Heart" won three, as did the revival of Cole Porter's "Anything Goes," with the terrific Sutton Foster, who won best actress in a musical.

Even though some victories, like Foster's and, of course, that of "The Book of Mormon," seemed preordained, many found this year's Tonys one of the most entertaining in a long time.

"This was my favorite awards show — except the ones where I've won," Stephen Colbert quipped to The Associated Press at the post-show gala at the Plaza Hotel. The Comedy Central host had just performed in a number from Stephen Sondheim's "Company," which played at the New York Philharmonic in April, starring Harris and featuring Colbert, Patti LuPone and many others.

"The speeches were so emotionally honest," Colbert gushed. He said he especially loved Foster's tearful speech, "bleeding for her dresser." (Foster did tearfully call her dresser, who is leaving her soon for a new project, "the greatest artist in the world.")

Also strolling through the Plaza fete was Mark Rylance, who won best actor in a play for his masterful portrayal of Johnny "Rooster" Byron in Jez Butterworth's "Jerusalem." Just as he did three years ago when he won for "Boeing-Boeing," Rylance simply quoted a poem by Louis Jenkins, an obscure poet from Minnesota. This one was about, well, walking through walls.

Why did he choose it? "I like it," he told the AP, joking that Jenkins "writes all my acceptance speeches."

Norbert Leo Butz won for best actor in a musical for playing a frumpy FBI agent hot on the heels of a con man in "Catch Me If You Can," his second Tony. He movingly paid tribute to his sister, who was killed while he was working on the show. Unfortunately, the wrap-it-up music was playing him off.

Frances McDormand, who showed up to the awards ceremony at the Beacon Theatre in a short denim jacket over her long striped dress, kept on the casual jacket as she accepted her best actress award for her portrayal of a South Boston, blue-collar woman in the David Lindsay-Abaire play "Good People."

The directing prize for a play went to Marianne Elliott and Tom Morris for "War Horse," which goes for the tears every night with its story of a boy and the horse he loves. "We quite like it when people cry," Morris cracked backstage.

Shows left empty-handed included "The Scottsboro Boys," which had 12 nominations, "Sister Act," ''The Merchant of Venice," and "The Motherf---- With the Hat."

Nikki M. James, who won for best featured actress in a musical in "The Book of Mormon," dedicated the award to her dad, who died while she was in high school, and to her nephew Ozzie, who was born with kidney problems.

"It's the proudest moment of my career," said Barkin, who paid emphatic tribute to Kramer and his role in publicizing the AIDS crisis. Hickey warned his family in Texas that they'd better not be watching the Heat-Mavericks game instead of the Tonys. (Presenter Chris Rock — who is in "The Motherf---- With the Hat" — also made a reference to missing the climactic game.)

John Larroquette, in his Broadway debut, won the award for best actor in a featured role in a musical for "How to Succeed in Business Without Really Trying." He thanked his co-star Daniel Radcliffe, who was not nominated but played a prominent role in the Tony telecast, saying that without the "Harry Potter" star he'd be "home, sitting in my underwear, watching this on television."

The costume award in a musical went to "Priscilla Queen of the Desert" for flamboyant concoctions by Tim Chappel and Lizzy Gardiner — including drag queens dressed as colorful frosted cupcakes — and Desmond Heeley won for his costumes for "The Importance of Being Earnest."