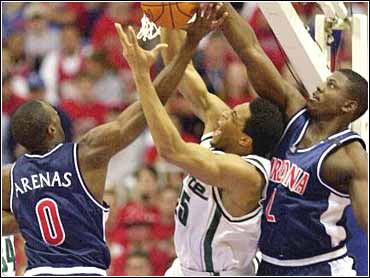 As the buzzer sounded, Richard Jefferson threw his hands in the air and sent a salute to all those Arizona fans who have watched this bittersweet season unfold.

"One more win," he mouthed to the crowd, as he thrust his index fingers in the air. "One more win."

A five-minute barrage of can't-miss shooting and smothering defense pushed the Wildcats to an 80-61 victory over defending champion Michigan State in the NCAA tournament's semifinals Saturday.

With a victory Monday over the winner of the Duke-Maryland semifinal, Arizona will close this season in true storybook fashion. And what an ending that would be, for a team still mourning the loss of coach Lute Olson's wife, Bobbi, who died of cancer Jan. 1.

"It's been real tough, what the coach has gone through and what the team has gone through," Jefferson said. "It keeps coming up continuously. That's the hardest part for us as a team. We've been talking about it a long time. The season is dedicated to Mrs. Olson."

Using a 21-3 run to start the second half, Arizona took a 20-point lead, then held off a brief Michigan State rally to move closer to its first title since 1997.

Maybe a championship will put a permanent end to the debate about Arizona being a "soft" team from the Pac-10 a reputation that has dogged the Wildcats despite heir perennial success.

"If they consider us soft, that's a good thing," point guard Jason Gardner said. "We have the emotion going our way. We knock their confidence down and ours goes up. We went through a lot this year, but we knew we'd be contenders."

Despite the loss of Mateen Cleaves and two more seniors from last year's title team, the Spartans became just the ninth team to make three straight Final Fours. But against the preseason No. 1 - the team center Loren Woods said might be the best ever - Michigan State appeared outmanned.

Arizona's Richard Jefferson talks about how the team has dealt with the death of coach Lute Olson's wife Bobbi.

Michigan State coach Tom Izzo lauds Arizona and discusses what went wrong for the Spartans."We just did some things out there that were unSpartan-like," coach Tom Izzo said. "But we had a heck of a year, and I'm not going to let this ruin that."

Bobbi Olson's death was only part of Arizona's story.

Woods and Jefferson were suspended early in the season for violating NCAA rules. Coaches sent senior Eugene Edgerson home for a few days in January after he complained too loudly about the role he was playing.

But nobody seemed upset with their role in this game, especially Gardner, a 5-foot-10 guard who played at the Indianapolis high school where Arizona practiced for the Final Four in 1997.

All Gardner wanted was a glimpse of practice, but security guards kept shooing him away. Four years later, he was at the center of Arizona's dominating performance, scoring 21 points on 6-for-11 shooting.

Gardner stepped in front of a pass one of 12 Arizona steals then glided in for a layup and a three-point play with seven minutes left to give the Wildcats a 15-point lead and essentially end Michigan State's brief comeback.

Before that, Michael Wright was at the center of the 21-3 run that gave Arizona (28-7) a double-digit lead.

The junior forward, who didn't take a single shot in last week's victory over Illinois and was barely a factor in the first half of this game, opened the half with a short jumper, and had a pair of layups during the run that gave Arizona a 53-33 lead. Wright finished with 13 points.

"In the first half, I played kind of lackadaisical," Wright said. "But n the second half, I had to come out and establish myself."

Jefferson had 17 points for the Wildcats. Before his salute to the fans, he shot a meaningless airball that Edgerson dunked, an emphatic ending to a dominating night.

"It was a great performance," Olson said. "I thought particularly in the second half, we made it difficult for Michigan State to get looks and we made a run."

Down by 20, Michigan State's Andre Hutson finally got going. He scored 18 of his team-high 20 points in the second half. But Charlie Bell, the other senior leader on this team, had an awful game 1-for-10 shooting and just three points as the Spartans (28-5) struggled to decipher the zone defenses Arizona unexpectedly threw at them.

Michigan State shot 2-for-14 from 3-point range, its second-worst performance of the year. The Spartans turned it over 15 times.

"We threw interceptions time and time again," Izzo said. "We feel bad to go out this way. For some reason, we weren't with it. It's a big stage. It happens."

The future still looks bright for Izzo's team. Freshman center Zach Randolph scored 12 points and was Michigan State's only inside threat in the first half, which ended with Arizona leading 32-30. Another freshman, Marcus Taylor, shot well early and scored eight points.

As expected, Michigan State held the rebounding edge 40-33, but Woods, the gangly, 7-foot-1 center, held his own, finishing with 11 points and eight rebounds, mostly in the first half.

Bell, the point guard, led Michigan State with 10 rebounds. Jason Richardson, a sophomore considering leaving for the NBA, had just six points on 2-for-11 shooting, as the Michigan State starting guards shot 3-for-21.