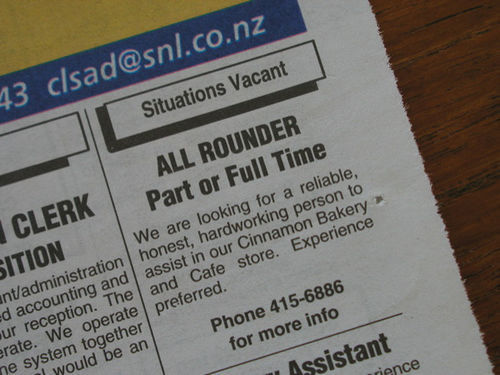 Feeling bored or frustrated at work? And maybe a little uneasy because you fear another round of right sizing?

Do what Von Plagmann of Transamerica Life did. Create your own new job. As he wrote in The New York Times, Von, a customer service rep, noticed that the letters he was sending clients were often poorly written and confusing, and sometimes inaccurate. He asked his boss if he could improve the templates for the 140 letters and in short order had reduced the number of 70. His boss was so impressed she recommended him to a corporate VP who was looking to revamp Transamerica's entire library of letter templates, some 1700 in all. Pretty soon Von was promoted to this assignment and given a raise.

And as he explains, there are "two lessons" he can share. "First, a new job may be at your fingertips and you may never know it...Second...skills you acquire in one job will come in handy later." Von applied his experience working at Toyota Financial Services to his new job and was able to tackle the new assignment.

Von's experience is not unique. There are thousands of others who have done what he has done. A few years ago management experts coined a term for it -- "intrapreneurism" -- meaning thinking like an entrepreneur within a large organization. While we often think of the process as creating something new, like Von has shown, it need not be. You can be focusing on process improvement. Here are some suggestions.

Identify a need. Very often this is obvious, if you look. Von noticed that the templates were deficient and so he saw a need for improvement. This need was affecting his company's ability to serve its customers. So if you see a need for process improvement consider the impact -- how does it affect our customers, either internally or externally?

Plan for it. Consider what you can do. Be specific as possible in solving the problem or addressing the need.

Apply your skills. What can you do about it? Von is a big-picture thinker as well as a capable writer. Consider how your skills could be applied to your ideas. How could you do things better?

Ride the horse. Be willing to pursue the new task in a new direction. Von got a new job. That may be for you, or it may not. Or thinking more broadly it may give you credence as a designated problem solver. One who can identify problems and engineer solutions.

There is one caveat to all of this, and a point I make in my book, "Lead Your Boss," get approval from your boss before you start doing anything. You do not want to go out on a limb that could easily be sawed off. What do I mean? If you spend all your time on a new project without approval, you may not have time for the job you were hired to do.

Bosses should encourage their people to think more broadly, not necessarily as a means of individual job creation but job redesign and process improvement. What's more resourceful and capable talents such as Von will prove themselves in handling greater levels of responsibility and be promoted.

Those who can think and do for themselves -- within the mission of the department -- are ones who will help your organization succeed now and in the future.