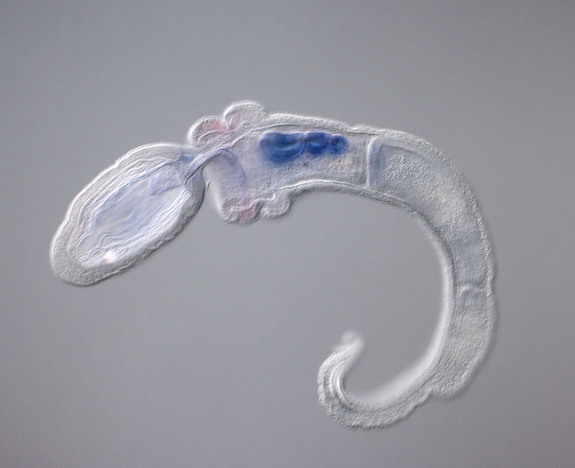 People have more in common with deep-sea worms than one might suspect. Over 500 million years ago, humans and certain worms shared a common ancestor, and people still share thousands of genes with the worms, said scientists who recently sequenced genomes from two marine worm species.

The results suggest humans and acorn worms, so called because of their acorn-shaped "heads," are distant cousins, said the researchers, led by Oleg Simakov of the Okinawa Institute of Science and Technology Graduate University in Okinawa, Japan. The researchers analyzed genes from two acorn worm species: Ptychodera flava, collected off Hawaii, and Saccoglossus kowalevskii, from the Atlantic Ocean. [Deep-Sea Creepy Crawlies: See Images of Acorn Worms]

Clearly, acorn worms look nothing like people; the worms have no limbs and breathe through slits in their guts. But they share approximately 14,000 genes with humans, scientists found, comprising about 70 percent of the human genome. These genes can be traced back to an ancestor of both acorn worms and humans that lived more than 500 million years ago, during a period known as the Cambrian explosion.

Genes from this ancient ancestor exist today not only in humans, but also in sea stars and their relatives, in cephalopods (octopuses and squid), and in all animals with backbones. The animals in this lineage are called "deuterostomes" (pronounced DOO-teh-roe-stomes.)

Of all deuterostomes alive now, acorn worms have been around the longest. "Acorn worms are our most ancient deuterostome relatives, dating back to the origin of deuterostomes, around 570 million years ago," Simakov told Live Science in an email.

Species like the acorn worms can help scientists understand how genes that first appeared hundreds of millions of years ago control the development of different but related physical features across animal species. This happens even in species as different as acorn worms and humans.

As deuterostomes evolved, many species emerged that were more complex than their acorn-worm cousins. But even in later species, some physical features can still be linked to genes in acorn worms for simpler structures that perform the same jobs, Simakov and his colleagues found.

"The genomic data fills in the gaps in our understanding of their evolution," Simakov explained.

After sequencing the worms' genomes and comparing them with genomic data from a range of diverse animals, scientists found 8,716 gene families, or sets of similar genes, in the acorn worms that are shared across all deuterostomes.

One family contained a gene cluster unique to deuterostomes, linked to feeding and breathing in acorn worms. These genes were particularly interesting to the scientists, they said. Acorn worms feed using specialized slits near their gut regions, located between the mouth and the esophagus. The slits allow water to pass through the worm's mouth but bypass the animal's digestive tracts. No animal outside the deutorostome group has structures like these, so the scientists took a closer look at the genes that controlled them. [Animal Codes: Our Favorite Genomes]

As much as acorn worms can tell scientists about many species alive today, there is still much to discover. Simakov said he is eager to expand genomic analysis to include more under-sampled regions across the sprawling tree of life. The more genetic data scientists gather, the better their ability to unravel humans' own genetic legacy and pinpoint the parts of human DNA connected to all life on Earth.

The finding is detailed Nov. 18 in the journal Nature.

More than half of teens make new friends online
Thanks for reading CBS NEWS.
Create your free account or log in
for more features.
View CBS News In
CBS News App Open
Chrome Safari Continue
Be the first to know
Get browser notifications for breaking news, live events, and exclusive reporting.