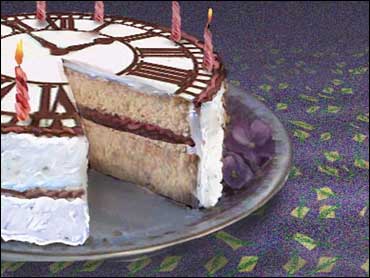 For years, scientists have been predicting that some day in the future, 100th birthday celebrations will be no more unusual than increases in postal rates. But lately, some researchers say that the time when people's life expectancy will be in triple digits is going to happen sooner than most of us thought. Experts at a recent meeting of the G8 countries stated, "Most children alive today in the G8 countries will survive to celebrate their 100th birthdays." That sounded pretty good, but then I read the claims of Cambridge geneticist Aubrey de Grey. He feels that people can live to be 1,000 years old without suffering any of the bad things usually associated with old age. (That "1,000" is not a typo.) He went on to say, "I think the first person to live to 1000 might be 60 already." Hello! Get in line behind me.

Let's get the more modest predictions out of the way first. Some aging specialists believe that because of our healthier lifestyles, and because of advances in medicine, soon 100 will not be out of reach for most people. Then there is the group who say that living longer is possible if people just join them in "calorie restriction." They're not just talking about skipping that extra slice of pizza. They suggest that people eat about 30 percent fewer calories than normal while still getting adequate amounts of vitamins, minerals, and other nutrients. So, men who are six feet tall will eat only about 2000 calories a day and weigh 135 pounds. Who would want to live like that? If we make it to a hundred on this diet, when our big birthday comes along, we probably won't even be allowed to eat any of our cake.

So, the "live to 1000" plan of Aubrey de Grey is the most intriguing. As with the "live to 100" predictions, he is not only talking about living a long life, but also a very healthy one. In fact, he believes we'll be able to look and feel like a 20-year old if that's what we want. He says that most people who die from diseases associated with "old age" die because of molecular and cellular damage. He reasons that if that damage can be taken care of, old age — and therefore, death — can be put off almost indefinitely.

Currently, Aubrey and his associates are conducting clinical trials on mice, and he claims they're going well. He is optimistic that the mouse trials, followed by the human trials, should only take another 25 years or so. In other words, if we can all just hang on for another 25 years, each of us might be able to live to be 1,000. Just try not to get hit by a car for the next quarter of a century.

Needless to say, there are quite a few scientists who don't take de Grey very seriously. As they plan for the future, they aren't changing their projected retirement age to 865.

But let's give de Grey and those who believe in his theory the benefit of the doubt for a moment. What would the world be like if some folks lived to be a thousand or more? Would we benefit from the wisdom of older people who had seen so much? Would human accomplishments be greater than today because everyone would be able to develop to his or her own potential? Would we ever be able to find a parking place?

And how are parents going to feel about their kids who are just out of college, trying to get into what will be a much more crowded job market? Are they going to want to put up with their kids still living at home, sprawled on the couch for several hundred years, waiting for a job to open up?

The interesting thing about this kind of speculation is that it brings up the idea of whether there is ever an age when people should be considered "old enough" to die. A 20-year-old may feel that a person who is 94 has lived a long and full life, and that nobody should feel bad if he dies at that age. However, when that young person ages and becomes 93, he no longer feels that way about 94. Most of us probably think 1,000 is too old for a person to live. But will we still think that when we're 999?