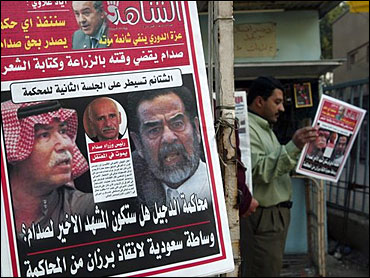 What's next? Is the administration going to produce its own version of "The Daily Show" and call it news? The latest revelation that a public relations firm — The Lincoln Group — has been paid by the Pentagon to plant news stories that are favorable to the U.S. in Iraqi papers would be shocking if it weren't so predictable. It's not that long ago that the administration admitted paying U.S. columnists to write pro-administration columns. President Bush publicly abandoned this practice, but so far, he hasn't taken responsibility for doing the same thing abroad.

The outrageousness of planting stories in Iraqi newspapers is, obviously, heightened because this occurs at the same time that we are supposedly encouraging Iraq to promote freedom — and a true and free press is the cornerstone of that freedom. If this manipulation of the press continues, how will we ever know what is a legitimate news story or column and what is something paid for by the government? How will we know when they are sneaking their own words into stories?

Obviously, this column is not something the government would ever pay for, and we, I mean, they don't "sneak" words into stories.

We seem to be abandoning the principle that the best way to get other countries to adopt the ways of a free and democratic society is to set a good example for them. For instance, if we want Iraqis to have free speech, we can't call Americans who oppose the war traitors.

We can't use the excuse, "The other side uses propaganda in news stories, so why shouldn't we?" We're supposed to be better than they are.

We are better than they are. We are good and they are evil.

Look at the administration's attitude towards torture. When other countries engage in torture, it is barbaric and a crime against humanity. When we do it, it's "necessary for our security."

The United States does not engage in torture. At the same time, we have reservations about agreeing to abandon this important tool of ours.

Not surprisingly, the planted stories aren't even working in terms of winning the hearts and minds of the Iraqi people. When Muhammad Abdul Jabbar, editor of one of the major Iraqi papers was asked if the Pentagon-sponsored fake news was effective, he replied, "I would spend the money another way."

Don't worry, Muhammad. We're spending it all kinds of ways.

It may be a cliché to say that "truth is the first casualty of war," but how many more times can it be mortally wounded? Remember WMDs? Remember the alleged connection between Iraq and al Qaeda? Remember Colin Powell pointing to all those "threats" at the U.N.? The Bush administration is certainly not the first to disseminate false information, whether on purpose or because of shamefully bad intelligence. But aren't you tired of hearing things that you know aren't true?

Colin Powell is not a member of the current administration. Currently, he is a private citizen who has served his country honorably, at least until we hung him out to dry.

We've been told over and over again how well the war in Iraq is going, and yet American casualties mount. We're told that we're winning the war against terrorism as the number of terrorists increase. President Bush has said repeatedly that we must "stay the course." Recently, there have been some calls to start thinking about pulling out of Iraq. First the administration viewed these calls as unthinkable. But after checking the polls, they began to choose their words more carefully. Now, there are a lot of people who would bet that significant troops will be pulled out before the 2006 Congressional elections. What will the administration tell us when they pretend that the two events are unrelated?

We do not allow polls or elections to dictate policy. On the other hand, we feel it's important to be responsive to the wants of the people.

So, the next time you're in the supermarket and you see one of those tabloids with a headline like, "Woman Gives Birth To Three-Headed Dog," don't laugh too loudly. That story probably has about as much credibility as whatever's on the front page of The Iraqi Daily News.

There is no such newspaper — at least not on the U.S. payroll.


Lloyd Garver writes a weekly column for SportsLine.com. He has written for many television shows, ranging from "Sesame Street" to "Family Ties" to "Frasier." He has also read many books, some of them in hardcover.