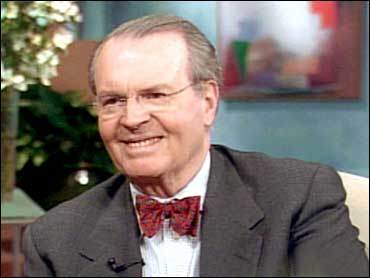 For a quarter of a century, Sundays have been defined by a trumpet fanfare and the broadcast that accompanies it. CBS' Sunday Morning brings to mind the wonderful laziness of the day, a time to enjoy family, an extra cup of coffee, a thick newspaper, as well as the comforting, familiar presence of Charles Osgood.

In celebration of the 25th anniversary of the broadcast, a compilation of favorite moments will air this coming Sunday.

Though Osgood hesitates to pick his favorite, he tells The Early Show co-anchor Harry Smith, "I think there is a sort of positive and encouraging and sometimes, I must say, even inspiring quality about the broadcast. I think that's why people watch."

Unlike The Early Show viewers, who are on the go, Osgood says on Sunday Morning the assumption is that people are actually sitting down before the TV in their bathrobes and slippers with a second cup of coffee.

He says, "I think because it's Sunday morning and because there's not as much pressure as there is during the week, I think we're able to do longer pieces, a little more thoughtful pieces and be a little more reflective. And we've carried forward Charles Kuralt's notion that he wanted to do pieces about people he admired. And as he said to me, 'Charles, most of the people in this business think that we're not supposed to admire, we're supposed to investigate them.'"

A particular moment that stands in Smith's mind is pianist Vladimir Horowitz's return to Moscow. He went back and played a concert in his homeland, which he hadn't seen in many years.

Osgood notes, "It's the only time we did a concert from beginning to end. And, yes, it was a wonderful story. And you got not only to see the wonderful Vladimir Horowitz, but the people in the audience who had tears in their eyes."

In his 10 years with the show, Osgood has come to define the pace and language of the broadcast. His anchoring is straightforward, but from time to time, he also recites poetry and plays musical instruments.

"From the sublime to the ridiculous, Osgood playing the banjo," Osgood says, "It's not just a question of reporter involvement or anchor involvement. The point is, we do have some fun doing this. Although I think the broadcast tries never to talk down to its audience and never to assume that we are smarter than they are. So anything that I would do with my own friends is, I think, something that I would do on the air. So I don't mind showing you that I'm not a very good piano player."

Smith notes part of the show reflects the unseen presence of the first anchor, Charles Kuralt and what he gave to the broadcast. There is, Smith says, something still sacred about it.

Osgood notes that the word 'sacred' has been used before to describe the broadcast and says, "Well, it has been because it is Sunday morning and our pace is, I suppose liturgical."

Part of it is also the wildlife segment at the end of the show. Osgood notes, "That word 'love' is seldom applied to news broadcasts but it's often applied to us. I think partly because of the inspiration of Charles Kuralt to close out that broadcast with a moment when the anchorman completely stops talking and you share in a little bit of the beauty of nature."

That does not mean the show has stood still in time. Osgood points out, "The broadcast has evolved over the last 25 years. It did during the 15 years that Charles was the anchor and it's continued to evolve. And from the very beginning, it seems like the audience has grown and grown and grown. I think we've become like old friends to the audience, a part of their lives. And we feel that way about it, too. Twenty-five years is a long time, television years is measured in dog years."