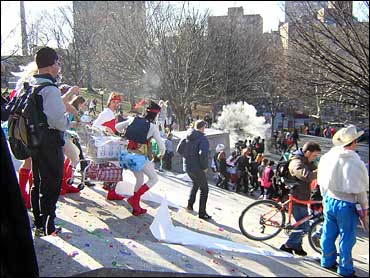 Once Chuck Knoblauch and the New York Yankees finished batting around in the first inning, the Seattle Mariners' only chance was a rainout.

Knoblauch's leadoff double began a five-run burst in the opening inning that was plenty for Orlando Hernandez. El Duque gave up just three hits in seven innings and pitched the Yankees to their third straight win.

"It definitely helped to have a lead where we could relax a little and not have the tension we had during the Angels' series," Yankees manager Joe Torre said.

Coming off a five-game series in which Anaheim won three times, the Yankees returned to form against the Mariners. Knoblauch had four of New York's 12 hits and Scott Brosius hit a two-run homer into the upper deck.

The Yankees rested regulars Tino Martinez and Paul O'Neill and pulled Derek Jeter after four innings with a 10-1 lead. At that point, every New York player in the batting order had either scored a run or driven in one.

"It was nice to have a little breathing room," Knoblauch said. "It's good for the team and good for your starting pitcher."

A festive crowd of 49,789 spent much of the evening doing the wave, cheering the marriage proposals posted on the scoreboard and booing Seattle center fielder Ken Griffey Jr. All in all, it was a long night for Mariners manager Lou Piniella on his 55th birthday.

"They jumped on us and took us out of it," Piniella said. "There's not much else to say."

Hernandez (9-4) gave up home runs by Monahan and Davis, struck out eight and walked four.

"I warmed up the same way I warmed up in Texas, the only difference is I was able to come out and do what I had to do," Hernandez said through an interpreter.

Griffey, the AL home run leader with 44, went 0-for-3 with a walk against Hernandez and rookie reliever Jay Tessmer. Ducey homered in the ninth off Mike Buddie for the Mariners' fourth hit.

Paul Spoljaric (4-3) was tagged for nine runs and nine hits in three-plus innings.

"I felt I had good control and was making quality pitches," Spoljaric said. "It just wasn't my night."
Knoblauch led off the first with a double, Tim Raines walked with one out and Bernie Williams hit an RBI single. Chili Davis, making his presence felt as the DH, doubled home two runs, Jorge Posada followed with an RBI double and Luis Sojo capped the burst with a single.

Brosius hit his 17th homer to left field in the third and Raines met reliever Bob Wells with a two-run single in the fourth. Raines scored later in the inning on a wild pitch, and Mariners catcher John Marzano flipped the ball to a fan after retrieving it near the backstop.

Monahan homered in the third and Davis connected in the seventh.