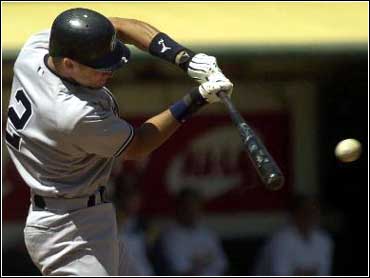 Bernie Williams had to talk his way into pinch-hitting. Manager Joe Torre is glad he did.

Williams drove in the go-ahead run in a three-run eighth inning as the New York Yankees came from behind to defeat the Oakland Athletics 7-5 Sunday.

"He had to convince me he was able to hit and he did," Torre said. "I was telling him to hit right-handed, but it was all him."

Jim Mecir (8-3) walked David Justice to start the eighth and Jose Canseco singled. After Jose Vizcaino came in to run for Canseco, Tino Martinez lifted a routine fly ball to center field. But Terrence Long struggled with the ball in the sun, then dropped it after trying to make a basket catch, loading the bases.

"I tried to battle the sun the whole time. It was right in my face," Long said. "I just lost it."

With one out, Luis Sojo hit a slow bouncer to third, which Eric Chavez picked up and threw past first baseman Mike Stanley. Sojo was credited with a single and an RBI, and the throwing error allowed a second run to score to tie it 5-5.

Scott Brosius was walked intentionally to set the stage for Williams, hitting for Clay Bellinger. Williams, who had problems with his ribcage and didn't start against a right-hander, grounded into a force play, allowing Martinez to score the go-ahead run.

"It was a situation where I didn't want to bat right-handed (against a right-hander)," said Williams, the Yankees' RBI leader with 109. "The left side is my strong side. They were counting on me to hit."

Justice added an RBI double in the ninth for New York.

"We made a lot out of nothing except for opportunities," Torre said. "When a team makes errors, you have to take advantage. That's how you win pennants."

Denny Neagle (4-4) won for the second time in three decisions. He allowed five runs on six hits and four walks in seven innings, striking out six.

Neagle won his two first starts after joining the Yankees on July 18, but was 1-4 in his next six starts before Sunday.

"I finally figured out what I was doing wrong and made the adjustments," Neagle said. "I was rushing my pitches. Hopefully, that will be that."

Mariano Rivera recorded the final four outs for his 29th save in 34 opportunities.

Heredia is 0-2 with three no-decisions since recording his 13th victory on July 30 against Boston.

"It's frustrating to have a 4-0 lead, then all of a sudden the Yankees come back and win," Heredia said. "That ticks me off, but that's the way they are, they're good. What can you do?"

Stanley gave the A's a 3-0 lead in the first with his 12th home run. After Randy Velarde doubled and Adam Piatt walked, Stanley hit a 1-0 pitch from Neagle into the left-field bleachers.

Sal Fasano hit his seventh homer of the year, a solo shot with one out in the second to put Oakland up 4-0.

"Gil put us in a position to win," Oakland manager Art Howe said. "We just couldn't hold it for him. We have it in our hands and let it slip away."

The Yankees got a run back in the third. Luis Polonia walked, stole second and continued to third when the throw went into center field. Derek Jeter followed with an RBI single.

In the fourth, New York drew within 4-3 on a run-scoring single by Jorge Posada and Bellinger's RBI double.

Piatt's fifth homer of the season in the fifth gave the A's a 5-3 edge.