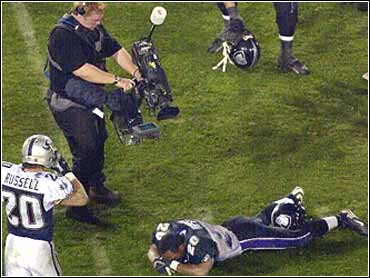 The novelty factor didn't last long for the XFL.

NBC's second broadcast of the fledgling football league owned by the network and the World Wrestling Federation drew about half as many viewers as the debut did, despite a boost in the final 45 minutes from a double-overtime game.

Tellingly, NBC finished last among the four major networks in prime time Saturday just a week after beating ABC, CBS and FOX with the opening of the part-sports, part-spectacle program.

The preliminary overnight rating for Saturday's XFL show was a 5.1, meaning an average of 5.1 percent of television homes in the country's largest 49 markets tuned in at any given time.

That's a steep fall from the 10.3 preliminary Nielsen number last week, and reminiscent of the viewer erosion experienced by the USFL in the 1980s.

Another bad sign: Repeating a pattern seen in Week 1, the XFL rating decreased each half-hour from 8 to 10:30 p.m. EST.

That was followed by a razor-thin increase for the next 30 minutes, but then the audience expanded by 25 percent from 11 to 11:45 p.m. as the Los Angeles Xtreme pulled out their 39-32 victory over the Chicago Enforcers in two extra periods.

There was a major glitch 12 minutes into the show, when an NBC power generator gave out and the feed from Los Angeles was lost. Viewers saw an on-screen graphic for 1 1/2 minutes before being taken to the night's other XFL game, San Francisco at Orlando, for about 25 minutes.

Still, it took just seven days for the loud and sometimes lurid XFL to go from vastly exceeding expectations to hovering right around the 4.5 national rating NBC promised advertisers. National ratings for Saturday night should be released Tuesday.

"We remain a work in progress, and our numbers last night are exactly where we said they would be the last six months," NBC Sports chairman Dick Ebersol said.

The size of the drop surprised some industry observers.

"I had anticipated perhaps a 25 percent decline from the first week to the second," former CBS Sports president Neil Pilson, who now heads a TV consulting firm, said Sunday.

Saturday's program had more WWF influence, with one of that group's star wrestlers opening the on-field proceedings in Los Angeles with rambling bluster about being "sick and tired of NFL suits telling us what they want."

There were a few other on-air tweaks orchestrated by Ebersol and his XFL partner, WWF impresario and marketing wizard Vince McMahon, as they strive to attract wrestling's core audience of young male viewers.

According to Pilson, it's too early to judge whether the XFL can be a viable TV product on Saturdays, traditionally the lowest-rated night of the week.

"We have to wait at least four weeks to get an accurate prediction for the season," he said.

The Week 2 rating, though, "does establish that last week we had an enormous tune-in from people who probably are not going to be regular viewers of the XFL," Pilson added.

"I thought the rating last week simply was a result of the terrific promotion for the debut. Now you have to deal with regular viewers - people who are going to come back on a week-to-week basis - and that is the major challenge for NBC and the WWF."