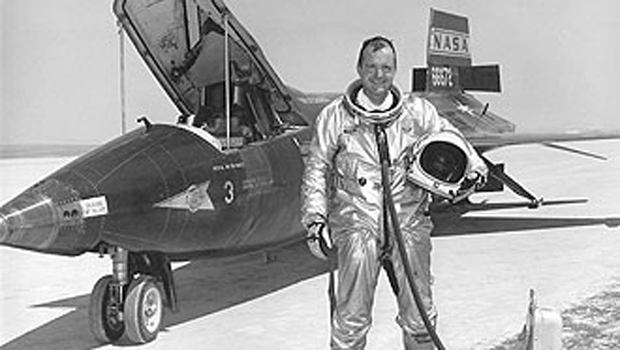 LOS ANGELES - Famed research test pilot Bill Dana, who flew the X-15 rocket plane and other pioneering aircraft during the birth of the space age, has died at age 83.

Dana died Tuesday at an assisted living facility in suburban Phoenix, according to an announcement Wednesday by NASA's Armstrong Flight Research Center in California.

Starting in the 1950s, Dana logged more than 8,000 hours in more than 60 types of aircraft, ranging from helicopters and sailplanes to the hypersonic X-15, which he flew to a maximum altitude of nearly 59 miles, reaching a top speed of 3,897 mph.

In 2005, he was awarded civilian astronaut wings for two of those flights to the edge of space - nearly 40 years after his X-15 flights - because at the time, NASA did not confer astronaut wings on its pilots.

Dana was born in Pasadena, California, but grew up in Bakersfield, where he fell in love with aircraft as a child.

"I remember seeing B-25s and P-38s flying over at the start of World War II and there was something very glorious and exciting about the warbirds, and I was attracted to it and I never really lost my ambition to fly those airplane(s)," he told Air & Space/Smithsonian magazine in a 1997 interview.

Dana graduated from West Point, became an Air Force officer and was a fighter pilot in the Korean War. He later obtained an aeronautical engineering degree from the University of Southern California and was hired as an aeronautical research engineer at NASA's High-Speed Flight Station in the Mojave Desert - now called Armstrong Flight Research Center - in 1958.

He became a test pilot the next year.

The X-15 flights were the high point of his career because of the plane's extraordinary performance, he said in the 1997 interview.

His first flight lasted just 10 minutes but knocked him for a loop.

The plane had a "great big engine and lots of acceleration and things happening very, very fast and I really didn't catch up with the airplane until I was back down to about Mach 2 (twice the speed of sound), where I had been before in fighter airplanes," he recalled.

Over the years, Dana took the danger of his profession in stride.

"There's a whole staff of engineers in the control room watching every move you make and my fear was that I would do something that would embarrass myself in the eyes of my peers, and that was the fear," he told Air & Space Magazine. "I don't ever remember being afraid I was going to die."

A heart attack forced him to give up flying but in 1993 he became the center's chief engineer.

He retired in 1998 but later worked as a contract employee writing histories of some of its programs, and during budget cutbacks even gave up his salary to do volunteer work in the center's history office, NASA said.