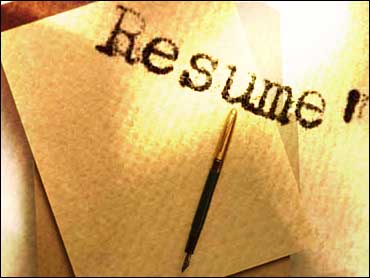 Thanks to high unemployment and a shrinking job market, college graduates are having to fight hard to land a job. That makes putting together a stellar resume more important than ever before.

Joseph Terach spent seven years as a career counselor and he is co-founder of Resume Deli, a resume-development service in New York City.

On Wednesday's The Early Show, he discusses common mistakes recent grads make when putting together a resume and answers common questions such as: how long should the document be, should I include an objective, and how should a resume sent online differ from one delivered via snail mail.

College seniors are graduating into one of the worst job markets in years. According to research by Monster.com, 53 percent of college seniors don't expect any job offers when they graduate, compared to just 23 percent in 2001. Another depressing statistic: while the national unemployment rate was 6 percent in April, the unemployment rate for people ages 20 through 24 was 10.1 percent.

Employers have so many people applying for such a limited number of jobs, Terach says, that they typically spend only 20 to 30 seconds looking at each resume that crosses their desks. That means grads (and everyone else looking for a position) MUST produce a stand-out resume.

The biggest mistake grads make is believing they don't have the qualifications to land an entry-level position, Terach said. They tend to discount the skills gained in work-study programs, volunteer positions and internships. While they usually list these items on their resumes, Terach believes that graduates don't look carefully enough at all they accomplish in these activities and downplay all they learned. You may not have worked in an accountant's office, for example, but you may have utilized many of the same skills by acting as treasurer and accountant for your fraternity. The key is recognizing the skills you've developed and then highlighting them on your resume.

The manner in which you highlight your accomplishments is going to determine if your resume is trashed or stashed away for further review.

"Don't say "I'm a good communicator," or "I helped do XYZ," Terach encouraged. "Show how you helped, be quantitative, use numbers, use data. That's what's going to catch the attention of employers. Once you share specific examples of the work you've done and what you've accomplished on the job, you won't have to say you're a good manager - it will be a no-brainer."