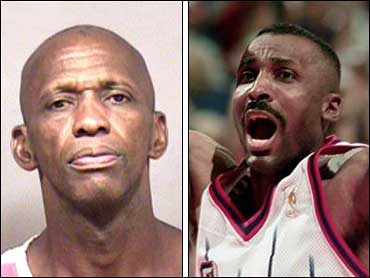 Eddie Johnson is still getting over what he calls the worst day of his life.

He scratched his way out of the Cabrini-Green housing project in Chicago, fashioned a long and successful NBA career, turned that into an opportunity on TV and built a reputation as an all-around good guy who loves to work with kids.

His worst scrape with the law involved a couple of traffic tickets.

Now he's dealing with a case of mistaken identity that shocked him and his friends and, he fears, may have permanently sullied his reputation.

Eddie Johnson was mistaken in some media reports for another Eddie Johnson — a retired 10-year NBA player from Florida who was arrested Tuesday night and charged with sexually assaulting an 8-year-old girl.

The Eddie Johnson who had nothing to do with that hideous accusation is a former Illinois star who went on to a 17-year career with the Kings, Suns, Rockets and other teams.

But when some media reports about the alleged crime included his bio information and file photo linked on the Internet, his phone started ringing.

"The thing that disappointed me the most is some people were overzealous enough to think it was me and attack me with a ferocity I can't comprehend," Johnson said in a telephone interview from his home in Phoenix. "That's the part that didn't allow me to sleep last night. That's the part that forced me to reach out to as many people as I could and say `Shame on you, that's not me."'

Edward Arnet Johnson is 6-foot-8, does color commentary on Suns telecasts during the season, gives motivational speeches and runs basketball clinics for youngsters. He has a DVD that teaches kids how to shoot the jumper. He retired from the NBA in 1999 and is 47.

"He called me really upset about it," said Charles Barkley, a former teammate of Johnson's who wanted to help him set the record straight. "It's a tough situation. He was on vacation in Hawaii. He gets back and the first thing he knows, he's dealing with this. And he's such a good dude. It's an unfortunate situation."

Edward "Fast Eddie" Johnson, Jr. — the one being held in a Florida jail on sexual battery and burglary charges — is a 6-foot-2, two-time NBA All-Star who played most of his career in Atlanta. An Auburn alumnus, he retired in 1987 and is 51.

When Eddie Johnson of Phoenix was still playing and Eddie Johnson of Auburn was retired and getting into frequent trouble with the law, there was little problem differentiating between the two.

"There'd be a news story about Eddie Johnson, but they knew it wasn't me, because I was on the court and in the box score," said Eddie Johnson of Phoenix.

Now that they're both out of the game — and especially during the off-season, when Johnson isn't on TV — the chances are better for a misunderstanding like the one that occurred this week.

Eddie Johnson of Phoenix said his goal Thursday and for the next several days was to get the word out about who he really is — and isn't.

"My name is everything," he said. "I don't fault the other Eddie Johnson for having that name. I think it's a great name. He just doesn't happen to be a great guy."