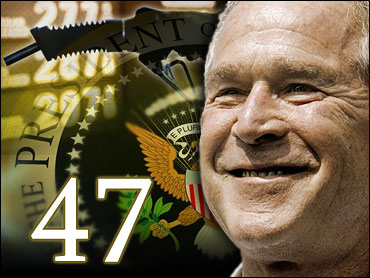 President Bush passed his recent physical with flying colors — and I mean "flying." He's 59 years old, but does not need cholesterol-lowering or blood pressure drugs. He eats healthy foods, and has lost 8 pounds since December. And the most amazing revelation is that his resting pulse is 47 beats per minute. That's not the kind of pulse rate usually associated with people in high-stress jobs or situations. It's the kind of pulse that well-trained athletes have.

To put it in perspective, the average pulse rate for a healthy male is about 72 beats per minute. (Unofficially, the average pulse rate for a writer on a deadline is 102). President Bush's remarkable 47 is down from an also exceptional 52 beats per minute in December. Obviously, I'm thrilled that he's in such good health. But I have to admit that part of me would feel more comfortable if his pulse were just a little bit higher.

I wouldn't want a president whose heart rate went off the charts every time there was a crisis in the world. But it would be nice if there were some indication that President Bush, like the rest of us, had some physical reactions to world events. History is filled with world leaders who grew old before their time, especially when their countries waged war. We can read about leaders who were unable to sleep, incapable of eating properly, and could never take their minds off the killing that was going on. I don't wish that on President Bush, but he seems to be on the extreme opposite end of the spectrum.

People have continued to die every day in Iraq, and his pulse hasn't gone up a beat. In fact, it's dropped five points since December.

Terrorists strike London, but his pulse is still a 47.

Opposition to the war, even from members of his own party, is at an all-time high this summer. He's still at 47.

Gas prices soar, and his pulse is still a 47.

The grieving mother of a young man killed in battle, Cindy Sheehan, wants to meet with the president a second time. He's still at 47.

People point out that to diffuse the situation, all he'd have to do is cut one of his bike rides short by twenty minutes and meet with her. He refuses. 47.

I'm not suggesting that he doesn't care. Everybody reacts to tragic events differently. It's just surprising that he doesn't seem to have the kind of physical reactions that most people have to these events. My pulse goes up when I watch the news on TV. He actually is the news, but his pulse stays low.

So, the question is whether being in such good shape and having a low pulse is an advantage for a world leader. In ancient times, when the heads of countries would actually fight each other, being in great physical shape was an obvious advantage. Today, we could still probably shout to various foreigners, "My president can beat up your president," but it wouldn't mean very much. These days, world leaders don't put on armor and fight. They send others to do the fighting. So, while they're home and others are fighting, how important is it for them to ride mountain bikes and remain so calm?

So, let me just reiterate that I'm very happy that President Bush is in such great health. But ironically, ever since I've learned that his pulse has gone down over the past few months, mine's gone up.