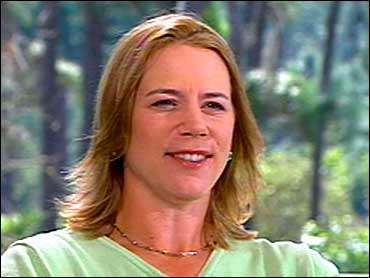 Maybe it's no surprise Annika Sorenstam accepted an invitation to take on the men in a regular PGA tour event.

She'll play in the Bank of America Colonial at Forthworth, Texas next month. Annika has won 19 of her 49 events the past two years. Even Tiger Woods has won only 10 during the past two seasons.

The Early Show co-anchor Hannah Storm spent some time with the young woman in her home in Orlando, Fla.

Annika says the women's game has come a long way.

Winning is something Annika Sorenstam does more often than any other professional golfer.

Sorenstam picked up her first tournament win at the LPGA stop just outside Los Angeles. She has won 20 of her 52 events in a little more than two seasons. Even Tiger Woods has only won 13 times in that period.

For her achievements, Sorenstam will be inducted into the LPGA Tour Hall of Fame later this year.

She said most of the courses on the men's tour are too long for her. So she isn't likely to begin competing against the men on a regular bases. But she does believe all the attention she's getting can only be good for the LPGA Tour.

Sorenstam practices off the men's championship tees, which is 35 yards further back from where she would normally tee off.

"There's no way I would have even have thought about this two years ago," says Sorenstam.

In a little more than two years, Sorenstam has added lots of muscle and about 20 yards to her game. But the days of doing her legendary 1,000 sit-ups are gone.

"The guy I work with now, he says that's just for looks," she explains. "I bench press a lot. I do squats. I do lift heavy weights just to get stronger."

Sorenstam started her journey at a press conference in January when she was asked whether she'd consider playing in a men's tournament. Her response: "Yeah, I would love to … In a heartbeat"

Like any great athlete, it's the challenge that motivates Sorenstam. And the extra work will help her on the women tour, which has four major events each year. Sorenstam is calling the Colonial her fifth major of 2003.

Hall of Fame inductee Nancy Lopez recently phoned Sorenstam and said she wished she had the opportunity to play men. The men's reaction has been mixed.

"I think it's great she's playing, but, this is the but part, it will only be great for women's golf if she plays well," says Tiger Woods. "I think if she goes out there and puts up two high scores, then I don't it's gonna, I think it's gonna be more detrimental than good."

"Whoever plays the game knows that two or four days of golf doesn't really change anything," she says.

Babe Didrikson Zaharias was the only other woman to play in a men's PGA Tour event. She did it in 1945. Now Sorenstam will find out how her game stands up under enormous media pressure.

There are others who want to take on the men. Last year, unknown Suzy Whaley qualified for a PGA tour event, playing off shorter tees than the men.

The rules have since changed. In January, 13-year-old Michelle Wie tried to qualify against the men while playing off the championship tees. Wie says she dreams of someday playing on the men's tour on a regular basis.

The average PGA tour player will out-drive Sorenstam by about 20 yards. But at colonial, it's accuracy that matters most — Sorenstam's forte. She has tried of comparing distances with the men.

"John Cook for example, he hits it about as far as I do," says Sorenstam. "And they don't make a story about him. But he is very accurate."

To make up yardage, Sorenstam will have to play with longer clubs, which makes it more difficult to be accurate. The level-headed Swede isn't into blame games. But she does think the controversy over whether to allow a woman to become a member at Augusta national is bad for golf.

"I'm a female golfer and I love to play, so of course I like to see a female member at Augusta," says Sorenstam. "I do think it's ok with just private male clubs. But Augusta to me is not a private club anymore. They host the biggest golf tournament in the world. So therefore I think that particular club is so different compared to the other male clubs."

Most of the courses on the men's tour are too long for her, so she isn't likely to begin competing against the men on a regular basis. But she does believe all the attention she's getting can only be good for the women's tour.

Sorenstam hopes playing at Colonial sends a positive message. Even if she comes up a little short, she believes she has nothing to lose.