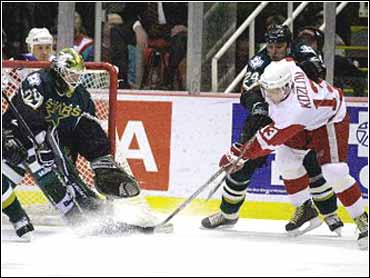 Pat Verbeek was almost embarrassed that he moved into 25th place on the NHL's career goal-scoring list as the Detroit Red Wings beat the Dallas Stars 4-2 on Thursday night.

Verbeek scored two goals to pass former Montreal great Jean Beliveau, who played from 1950-71, in the record books with 508 goals.

"It's kind of a crime because he was an elegant player, the way he scored goals was beautiful," said Verbeek, who is in his 18th season. "The way I score goals is ugly. I think the win is extra special, this is all gravy."

The Red Wings took a 3-2 lead, their first of the night, with 56.2 seconds left in the second when Martin Lapointe redirected Nicklas Lidstrom's shot that appeared to be going wide.

Lapointe scored his first goal in 15 games while Doug Brown, who scored the final goal, had a goal for the first time in 12 games.

"We had good balance," Detroit coach Scotty Bowman said. "It was probably the best four-line game we've had this year."

Dallas had won its last five at Detroit. The Stars are 1-11 when trailing after two periods this season.

"I thought when they went 3-2, they started to take the game over," Dallas coach Ken Hitccock said. "Their checking in the third period really did us in. I thought we had good focus for 30 to 35 minutes, then we made some mistakes and lost our energy."

Mike Keane scored 40 seconds into the game to give Dallas a 1-0 lead.

Verbeek tied it late in the first on a wrist shot from the left circle, which tied Beliveau's mark.

Dallas' Jere Lehtinen scored on a rebound to give the Stars a 2-1 lead early in second period.

Verbeek tied the it again when the puck trickled across the crease after Belfour stopped two shots.

Verbeek played for Dallas from 1996-99 and signed with Detroit as a free agent before last season.

"It's always fun to score against your old team," Verbeek said.

Verbeek was effective after being a healthy scratch in Detroit's last game.

"I'm never happy when I get sat out," he said. "The next game I'm usually foaming at the mouth. Tonight was no exception."

"He doesn't score anything from outside the dots," Lukowich said. "They're all close, hardworking goals."