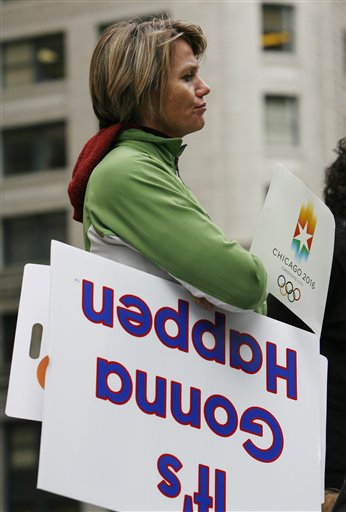 Chicago can't blame it all on Rio.

More like a backlash against any number of things American _ from hassling visitors at the borders to money squabbles to a quickie visit by President Barack Obama. Even a disrupted walk across the hall apparently played a part. And, yes, it didn't help that South America had never had an Olympics.

Chicago's leaders left here the same way they came in: convinced they had the best plan to host the 2016 Olympics. If only that was all that mattered in Olympic politics.

The Windy City is unlikely to bid again for 2020. With the games going to Rio, the odds they would come back to the Americas the next time around are long. But the U.S. Olympic Committee has made grand claims of wanting to be a partner with the IOC, and it's going to have to work even harder to make that happen.

"They realize that apparently they have a problem," Denis Oswald, a member of the International Olympic Committee's executive board, said after Friday's vote. "We want them to be fully part of the family and they probably have to take some steps."

Humiliated by New York's early exit four years ago in the 2012 bidding, USOC leaders had vowed to do things differently. They reached out to other countries to show they wanted to be interested partners, not detached overseers. They happily shared their coaches and training programs. They even agreed to consider sharing a little more of their piggy bank.

Meanwhile, they put the U.S. cities that wanted the Olympics through a rigorous screening process. If the United States was going to put a city forward, it would have to be pretty much perfect.

Chicago sure seemed to be. It was a compact bid that kept 90 percent of the athletes within 15 minutes of their venues, and used existing or temporary venues that wouldn't burden the city with white elephants. It was a dazzling setting on picturesque Lake Michigan, a major city that doesn't have major attitude.

Best of all, it had government support all the way up to the White House. Obama, whose Chicago home is a few short blocks from the planned Olympic stadium, took time to come to Copenhagen and lobby in person.

And yet Chicago was gone after the first round, a worse showing than New York four years ago. Even Tokyo, whose bid barely generated any mention in the days before the vote, beat the Americans.

"Stunned" and "shocked" were the words heard most often, from IOC members and the Chicago contingent.

"Either it was tactical voting, or a lot of people decided not to vote for Chicago whatever happened," IOC executive board member Gerhard Heiberg said. "Nobody knows, but everybody is in a state of shock. Nobody believes it. I'm very sorry about it. We will have to spend some time evaluating what happened."

Some people just don't like the way Americans do things.

One IOC member, Syed Shahid Ali of Pakistan, told Obama that foreigners "can go through a rather harrowing experience" getting into the United States and asked how he intended to deal with that when thousands of people come for the 2016 games.

Obama replied that "America, at its best, is open to the world," and the presentation ended with no further questions.

"This is an easy way for countries to express resentment toward us, as a superpower, without suffering any consequences, like having their foreign aid cut off or their weapons programs cut off," said Doug Logan, CEO of USA Track and Field. "It's an easy way for them to express a great amount of displeasure."

Obama's presence may have hurt as much as it helped. While several IOC members rushed to meet the president and the first lady after they left the session hall, not everyone was so enthralled. He was in town only five hours, then hurried back to Washington.

"It can be that some IOC members see it as a lack of respect," said Kai Holm, a former IOC member from Denmark.

And security was so tight whn Obama was here that members couldn't get across the hall, French IOC member Guy Drut sniffed.

"There was an excess of security that really made some of the members tense at the last minute," Drut said.

There are other geopolitical factors at play, too. The idea of going to South America for the first time was tantalizing, and Rio leaders left no doubt how badly they wanted these games. There also might have been some members who tossed their votes to Tokyo in the first round, assuming Chicago would get through and not wanting the Japanese to be horribly embarrassed.

"The whole thing doesn't make sense other than there has been a stupid bloc vote," senior Australian member Kevan Gosper said. "To have the president of the United States and his wife personally appear, then this should happen in the first round, is awful and totally undeserving."

But the Americans _ the USOC, at least _ also have to shoulder some of the blame.

A testy relationship between the IOC and USOC is almost ingrained. The IOC needs the United States _ its companies and broadcasters provide the largest share of their revenues _ and resents that it does. That the USOC spent many years acting as if it was above the rest of the group only worsened things.

When the vote-buying scandal in Salt Lake City's winning campaign for the 2002 Winter Games broke, IOC members took the brunt of the criticism and the USOC underwent a period of upheaval that was felt domestically and internationally. A lot changed, but the ice between the U.S. Olympic movement and the rest of the world never completely thawed.

USOC chairman Larry Probst and acting CEO Stephanie Streeter managed to work out a compromise on the long-simmering revenue-sharing dispute earlier this year, only to squander that goodwill when they announced plans for their own TV network.

And after years of relatively stable leadership, the USOC had a messy transition when Jim Scherr, a former Olympic wrestler who was well-liked in the movement, was dumped and replaced by Streeter.

"I think the revenue-sharing issue not being completely resolved was a factor," Scherr said. "Also, the desire for the IOC to go to South America and the fact that Rio has been in the process for four more years than Chicago was. They had a leg up from Day One."

And now they have the games.

Chicago chairman Pat Ryan refused to blame USOC leaders or anyone else, saying simply that this wasn't Chicago's time.