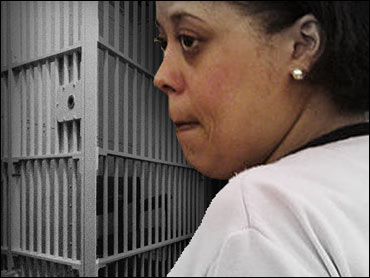 A videotape of Chante Mallard at a nightclub, just one week after she struck a homeless man with her car and left him lodged in the windshield to die, may have been on jurors' minds when they sentenced her to 50 years in prison for murder, attorneys say.

It ay also be grounds for appeal, her attorneys indicate.

The jury deliberated about 2½ hours Friday before agreeing to the penalty for Mallard, 27, a former nurse's aide. She will be eligible for parole in 25 years.

Mallard, after a night of drinking and using drugs, hit 37-year-old Gregory Biggs as he walked along a highway near her house about 3 a.m. on Oct. 26, 2001.

His body crashed through her windshield, lodging with his torso bent over the dashboard and his legs outside the jagged glass. Mallard never called for medical help. Instead, she drove home, parked in the garage and after crying and apologizing to the moaning man, left his mangled body in the car.

She said she was too afraid of being arrested to call for help and Ecstasy impaired her judgment. Medical experts testified Biggs likely died one to two hours later and probably would have survived with treatment.

A week later, Mallard and a friend went back to the same bar. Prosecutors showed jurors the nightclub's surveillance videotape of Mallard and her friend talking as they walked inside to blaring music.

After Mallard was convicted of murder Thursday, she sobbed while apologizing for the Biggs' death. When asked why she went back to the bar and continued smoking pot and drinking, she said she was trying to forget what she did to him.

Alpert — who had asked jurors to send Mallard behind bars for life, the maximum term — said he was pleased with the sentence.

"We just wanted to point out that this was a serious case, and it needed a serious punishment," Alpert said.

Biggs' 20-year-old son, Brandon, read a statement in court after the sentence was announced.

During the trial, CBS News Correspondent Bob McNamara reports, Mallard was asked if she thought she had gotten away with the crime, and she answered, "Yes." She said she deserved to be punished, and deserved jail.

But Kearney said Mallard was upset with the length of the sentence. He said he would appeal her conviction and argue Biggs' death didn't meet the legal definition of murder.

Mallard also was sentenced Friday to 10 years for tampering with evidence. That term will be served concurrent with the murder sentence. She pleaded guilty to the tampering charge before her trial began Monday.

Biggs' battered body was found in a park the day after he was hit. A friend of Mallard's and his cousin pleaded guilty to tampering with evidence by dumping the body. Clete Jackson and Herbert Tyrone Cleveland received prison sentences of 10 years and nine years, respectively.